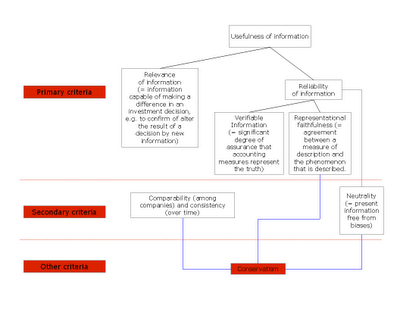 Does a strict application of the rule of accounting conservatism influence over the future profitability of a firm?

Ahmed and Duellman (Accounting and Finance 2011, 609 et seq.) answer this question in the affirmative and state that:

Reading about the consequences of practicing accounting conservatism, I was wondering how this principle is codified and what its status in the GAAP accounting regulation is today.

Conservatism is defined as “a prudent reaction to uncertainty to try to ensure that uncertainty and risks inherent in business situations are adequately considered”.

Even though the FASB discusses accounting conservatism within the framework of reliability, it is not part of the this concept. As a matter of fact, the hierarchy of accounting qualities, as established by the FASB, is as shown in the above table. In this schema, the blue lines represent conflicts that the FASB expressly recognizes. According to the FASB, such conflicts alter the practical application of the principle of accounting conservatism as follows:

Posted by Florian Lummert at 8:54 PM