Expansion vs. Prior Financing Structure

This topic has been explored by Sudipto Sarkar in a recent article in the International Review of Finance.

The author describes first the arguments that guide the decision to finance through debt or equity:

On the other hand, the main backdrop of debt financing is that the post-expansion default trigger will be higher, resulting in a higher probability of default or earlier default and, thus, to higher expected bankruptcy costs.

As a consequence, shareholders must make a trade-off between tax benefit and increased bankruptcy risk and cost linked to debt financing.

Debt allows the transfer of wealth from debt-holders to shareholders. Therefore, the agency incentive to use more debt to finance the expansion increases with the initial debt level.

Thus, the agency effect works in the opposite direction to the traditional trade-off theory, in which higher debt levels lead to reduced debt usage for the expansion.

The major findings of Sarkar’s quantitative analysis are fourfold:


The importance of contractual covenants

In this context, Sarkar refers to the importance of contractual covenants that (partially) rule out future debt issues and, therefore, imply that the expansion has to be financed predominantly with equity.

I would like to take this opportunity to briefly outline the major contractual covenants that the standard leveraged finance facility agreement, as recommended by the loan market association (LMA), provides for. 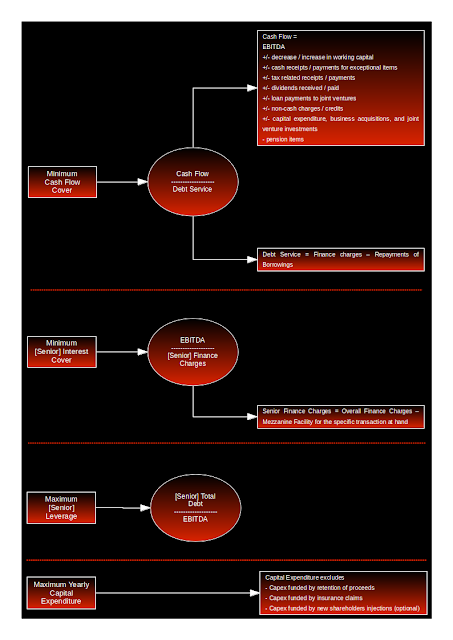 Obviously, only yearly capital expenditure limits have a direct influence on the borrower’s possibility to carry out expansion projects. However, a distinction between debt and equity financing of such expansion project is only relevant in case the firm has negotiated the optional carve out related to Capex funded by new shareholder injections. Otherwise, capital expenditure will be limited altogether, irrespective of the nature of its underlying financing.

As regards financial ratios, the minimum cash flow cover will be mostly concerned: Not only will the cash flow numerator be adjusted for the total amount of capital expenditure, business acquisition, and joint venture investment, but also the debt service denominator will increase depending on the extent of debt in the expansion financing mix.

The other financial ratios are also affected, but a a lower extend:

First, maximum senior leverage and maximum leverage ratios will be affected by the debt / equity mix for expansion projects because the ratios’ numerator will consider the total amount of debt whereas their EBITDA denominator will not take capital expenditure into account.

Second, minimum senior interest cover and minimum interest cover ratios will be altered as well. As a matter of fact, the ratios’ numerator will remain unaffected as opposed to its denominator that will increase, corresponding to an increasing portion of debt in the expansion financing structure.

Posted by Florian Lummert at 10:23 PM