On February 9, 2012, the Financial Times reported that regulators worldwide currently investigate into whether banks had colluded on their LIBOR submissions. In addition, on February 10 and 15, 2012, the FT reported possible implications of Citigroup and UBS in this probe.

To understand the ongoing discussion and investigations, I would like to clarify the calculation process as well as the legal status of LIBOR rate.

LIBOR refers to the London Inter Bank Offered Rate. It is defined as

“The rate at which an individual contributor panel bank could borrow funds, were it to do so by asking for and then accepting inter-bank offers in reasonable market size, just prior to 11.00 London time.”

In addition to this general definition, the following characteristics apply to LIBOR:


B. Currencies and Maturities

LIBOR rates exist for the following currencies and maturities: 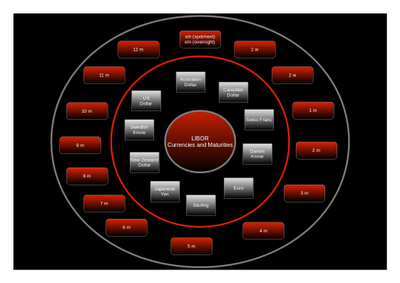 At the heart of the calculation process is the constitution of a contributor panel of banks for each currency. 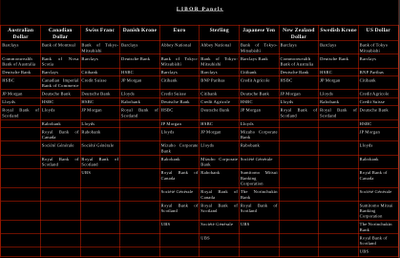 The above panels are compiled by the British Bankers' Association (BBA), advised by the Foreign Exchange and Money Markets Committee (FX&MMC), and after discussions with the BBA LIBOR Steering Group. The choice of banks is guided by the bank’s scale of market activity, its credit rating, and its perceived expertise in the currency concerned. The contributor panels are revised twice a year.

The process starts off with the contributor panel banks being asked the following question:

“At what rate could you borrow funds, were you to do so by asking for and then accepting inter-bank offers in a reasonable market size just prior to 11 am?”

As regards the submission of these rates, the BBA specifies that the rates must be submitted by members of staff with primary responsibility for management of a bank’s cash, rather than a bank’s derivative book. In addition, Contributor Banks must submit their rates independently from each-other.

If any bank submission falls outside a defined set of parameters, Thomson Reuters, BBA's calculation agent, will consult the contributor and request confirmation that the rate formulated is correct. The intention of this process is to avoid typing errors. The parameters are set by the FX&MMC and they are regularly reviewed to ensure they reflect prevailing market conditions and maintain the highest level of scrutiny over the rates. Currently, Thomson Reuters will coordinate with a contributor bank if


The above rates are directly communicated to the calculation agent Thomson Reuters. The latter then calculates a trimmed average of the submitted rates, eliminating a predetermined number of outliers that depends on the extent of the contributor panel in question.

Thomson Reuters not only publishes the LIBOR rates themselves but also all data contributed by each individual bank.

The BBA reserves its right to review the LIBOR fixing process from time to time. However, it promises to duly consider and notify planned changes in advance.


According to the BBA, the FX&MMC is independent of the BBA and any other organization. It has the sole responsibility for all aspects of the functioning and development of the LIBOR rate. Its internal organization comprises a chairman and 2 deputy chairmen.

The FX&MMC has three sub-committees: The fixings sub-committee is in charge of considering any information relevant to the LIBOR rate and its fixing in general. The oversight sub-committee exercises control over the contributing banks. It can issue (non-published) written guidance, consider a re-statement of contributor protocols; require an up-to-date audit of a panel bank’s contribution processes and recommend to the FX&MMC to remove a contributor bank. Finally, the steering group is in charge of reviewing the LIBOR process and, as the case may be, can make appropriate recommendations to the FX&MMC.


BBA LIBOR Ltd. is in charge of running the daily operations of the LIBOR benchmark. The company operates under the supervision of the FX&MMC.


Contributors undertake to have their internal processes for submitting rates audited as part of their firm’s annual compliance procedures and provide written confirmation to the FX&MMC that this audit has been completed.

Reading the LIBOR dedicated website, the detailed legal structure of the LIBOR fixing process in general and the FX&MMC in particular remain unclear to me.

For example, the composition of the FX&MMC remains loose. On the above mentioned website one can only read that “the committee consists of highly experienced market participants […] along with other concerned parties and associations who do not submit to bbalibor”.

In addition, reading BBA’s web page, the relationship between the FX&MMC on the one hand and BBA and the other parties described above remains ambiguous.

Finally, and perhaps most importantly, it seems that the whole fixing process is at the exclusive discretion of the BBA. Admittedly so, the information that BBA provides on its LIBOR dedicated website is very detailed. However, as an outsider to the whole process, you cannot really understand the entire legal framework of the fixing process.

My critic as to the vague legal structure does, however, not apply to the disclosure of data. Namely, the publication of outliers in the calculation process should ensure that the overall calculation process is carried out with the appropriate diligence by the parties.

Finally, as regards the ongoing investigation over LIBOR manipulation, I came across an interesting article (“Libor Manipulation?” by Abrantes-Metz, Kraten, Metz, and Seow) published recently in the Journal of Banking & Finance.

In the beginning, the authors remind the incentives that contributing banks might have to manipulate their submissions:


The authors then go on explaining the general rationale of statistical screening tests and, in particular, explaining their screening approach used to investigate any possible manipulation of LIBOR rates.

The major finding of the cited analysis is that, while some anomalies within individual quotes exist, this is not consistent with a material manipulation of the LIBOR rate.

Posted by Florian Lummert at 11:23 PM