Credit Rating Agency Regulation in the US

This week, I would like to build on my last week’s article about the existing and proposed regulation of credit rating agencies (CRA) in the EU by discussing the current status of such regulation in the US.

Basics of the Dodd Franck Reform of CRA Regulation

On January 5, 2010, the Dodd Franck Act has provided for significant changes in the US regulation on CRA.

The Dodd Franck act starts off with the basic finding that “credit rating agencies face conflicts of interest”. The new legislation intends to contain such conflicts by “careful monitoring” and by “giving clearer authority to the Securities and Exchange Commission”.

First of all, the new regulation distinguishes 3 types of rating agencies:

The bulk of new legislation applies to NRSRO and any person associated with a NRSRO.

Current Status of US CRA Regulation 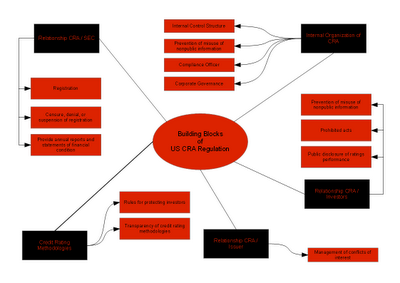 The relationship between the CRA and the SEC is characterized by the obligation of the CRA to register and the possibility of the SEC to cancel this registration.
It is important to note that the obligation to register only applies to CRA who want to be treated as NRSRO. The Securities Exchange Act 1934 contains detailed information regarding the content of the CRA’s application. The main reason for the SEC to refuse registration is an applicant CRA “not having adequate financial and managerial resources to consistently produce credit ratings with integrity and to materially comply with the procedures and methodologies disclosed”.
Generally speaking, the SEC can cancel the registration if this is “necessary for the protection of investors and in the public interest” and one of the enumerated cases of cancellation (such us commission of crimes and violation of securities laws) exists.

Prohibited acts include the following: 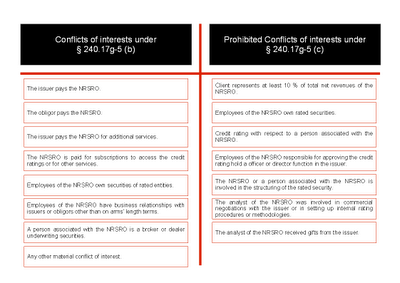 Posted by Florian Lummert at 10:05 PM