Financial governance in Europe is obviously a hot topic these days. Every day, we can read in the financial press the latest news on


In this discussion, we can read about ever new mechanisms, facilities, and rescue funds that are created by Euro zone and/or EU members. I voluntarily admit that I feel a little bit lost in all these shortcuts used to designate the different institutions.

In this article, I would like to summarize which basic institutions have been created so far and what their respective purpose is. 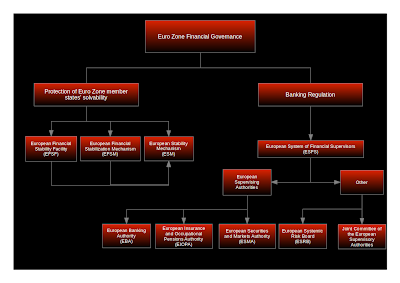 The EFSF has been created on October 19, 2011 by an international treaty. It constitutes a limited liability company under Luxemburg Law and has its registered office in Luxemburg.

The purpose of the EFSF is to grant financial assistance to beneficiary member states to protect their solvency. It can do so by


The EFSF is backed by irrevocable and unconditional guarantees of the member states totalling 780 BEUR.

The EFSM was put in place in May 2010 to preserve financial stability in the EU.

The ESM is an international financial institution that has been created by the ESM treaty signed on February 2, 2012. It has full legal personality; its principal office is in Luxemburg and it may establish a liaison office in Brussels.

The authorized capital of the ESM is 700 BEUR. Such capital is divided into paid-in shares (80 BEUR) and callable shares (620 BEUR). Annex I of the ESM treaty defines the proportion of authorized capital that each ESM member state shall contribute. Germany and France are the biggest contributors with 27 % and 20 % respectively.

The purpose of the ESM is to protect the financial stability of the Euro area by providing funding and other financial support to ESM members which face severe financing problems. It can support its member states through

The ESFS is a network of national and Union supervisory authorities whose main objective is to ensure that the rules applicable to the financial sector are adequately implemented to preserve financial stability and to ensure confidence in the financial system as a whole and sufficient protection for the customers of financial services.

The ESRB is based in Frankfurt am Main. Its purpose is to ensure the macro-prudential oversight of the Union's financial system. It

The EBA has its seat in London and has legal personality as well as administrative and financial autonomy. It shall


The EBA is best known for carrying out stress tests of European banks.

It has legal personality and its seat is situated in Frankfurt am Main.

The objective of the ESMA is the same as EIOPA's objective, e.g. to protect the public interest by contributing to the short, medium and long-term stability and effectiveness of the EU financial system. However, as its name indicates, its focus is on protecting the stability of securities markets.

The ESMA has legal personality and it has its seat in Paris.

The purpose of the Joint Committee is to settle cross-sectoral disagreements between the European Supervisory Authorities.

Posted by Florian Lummert at 12:20 PM