What is a Collective Action Clause?


Collective action clauses (CAC) are very much discussed today as they are at the heart of the Greek bond restructuring and its outcome.

A collective action clause treats a very simple problem: If you pass a contract and on both sides of this contract there are several parties, basic civil law principles provide that every party must agree to any modification of the contractual terms. The “pacta sunt servanda.” principle says that every party must be in the position to rely on the contents of the signed agreement without running the risk of seeing the contractual terms changed against one’s own will.

When we look at bond issues to which a multitude of parties subscribe, the backdrops of this principle are obvious:

Collective action clauses intend to solve the above described problem by providing ex ante for contractual mechanisms that facilitate decision-making processes in times of crisis. The basic idea is pretty straightforward. As we know that people will not be able to find an agreement in times of crisis, we try to get their agreement beforehand, e.g. at a time when everything looks fine.

However, there is no concrete definition of which contents you can find in a collective action clause.

As an example, I analysed one Greek bond issue from 2004, whose CAC provisions may be summarized as follows: 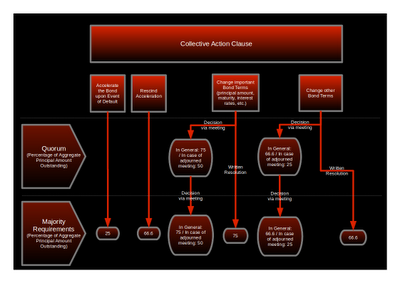 The principles of CAC provisions are pretty much standardized in bond documentations. However, the problem is that their individual design varies over time and from one bond issue to another, reflecting both changing market practices and changing balances of power between investors and bond issuers. As a matter of fact, this is what contributes pretty much to restructuring negotiations getting so complicated and time consuming.
Posted by Florian Lummert at 11:50 PM