On April 16, 2012, the FT reported a possible conflict of interest / bribery between 3 powerful Angolan officials and the American company Cobald International Energy. As a matter of fact, the Angolan officials are blamed for holding unconcealed interests in a Cobald venture in Angola.

Besides mandatory American anti-corruption regulation, this case involves the voluntary code that has been developed by the Extractive Industries Transparency Initiative.

The EITI is a non-profit association set up under Norwegian law. Its members are
As you may expect, every member of the association engages to support the objective of the EITI. As a matter of fact, a membership can be canceled if the member in question has conducted his affairs in a way considered prejudicial or contrary to the EITI Principles.

The major goals of the EITI are threefold:
EITI is funded by contributions from its members and, in addition, by grants from bilateral and multilateral donors.

First and foremost, strictly, speaking, the EITI Rules are not enforceable by themselves. The only concrete sanction that is provided for in the EITI articles of association is a possible exclusion of a member in case he violates his obligations embedded in the EITI Rules. However, states (especially those who are members of the EITI) may adopt the EITI Rules and transfer them into national law making it, thereby, legally binding.

The EITI Rules consist of 5 parts: 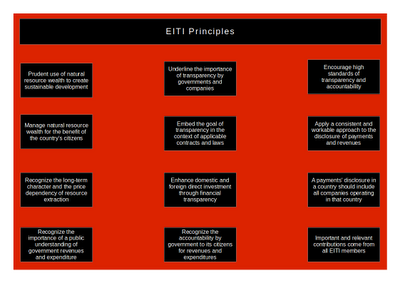 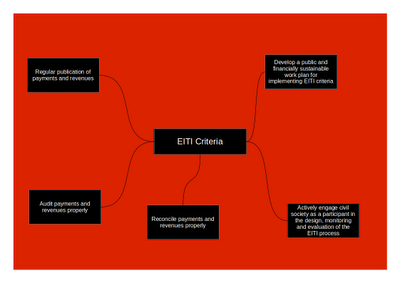 Such requirements specify the above principles and criteria. They describe, in a very detailed way, which actions governments of EITI member countries should take to be EITI compliant.

The validation process assesses whether the above EITI requirements have been met. Its purpose is twofold: Promote a dialogue and learning at the country level and safeguard the EITI brand by holding all EITI implementing countries to the same global standard.

Policy notes are issued by the EITI boards. Their goal is to strengthen the quality, consistency and sustainability of the validation process.

Posted by Florian Lummert at 5:10 PM