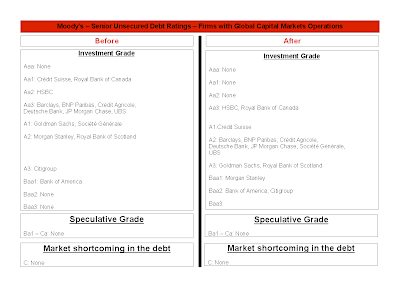 The central reasoning for the above down-gradings of the financial institutions is their capital market activities and, thereby, their significant exposure to the volatility and risk of outsized losses, i.e tail risk.

More specifically, Moody’s analysis is carried out in 3 major steps:

According to Moody’s methodology, the standalone credit worthiness of a financial institution depends on 6 key factors:

In a nutshell, Moody’s considers that government support is likely to become less certain and predictable over time, due to ongoing regulatory reform projects in many developed countries. As a matter of fact, the analysts identify a tendency towards more flexibility and limited support in a stress scenario.

In this section, Moody’s applies the above criteria to each financial institution and assesses the criteria in favor of a rating downgrade against any mitigating elements.

Posted by Florian Lummert at 8:42 PM