In February, expanding on the ongoing press coverage of possible LIBOR and EURIBOR manipulations, I have written about the functioning of these base rates.

As the UK Financial Services Authority (FSA) and the US Commodity Futures Trading Commission (CFTC) have inflicted, on June 27, 2012, a 59.5 M Sterling / 200 M USD fine on Barclays for its shortcomings relating to LIBOR / EURIBOR submissions, I would like to come back to this topic.

Chairman Marcus Agius having resigned today, the consequences for Barclays are still ongoing. 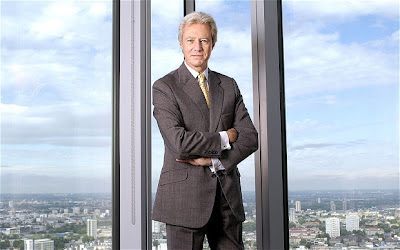 “Last week’s events – evidencing as they do unacceptable standards of behavior within the bank – have dealt a devastating blow to Barclays’ reputation. As chairman, I am the ultimate guardian of the bank’s reputation. Accordingly, the buck stops with me and I must acknowledge responsibility by standing aside.”

The central stipulations for the FSA fine are the following: 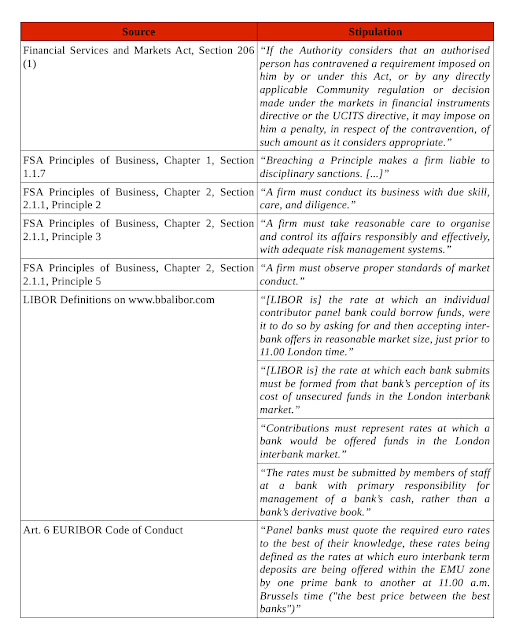 I have discussed the specific obligations that a LIBOR / EURIBOR contributor panel bank must respect, in the previous posts in February 2012. 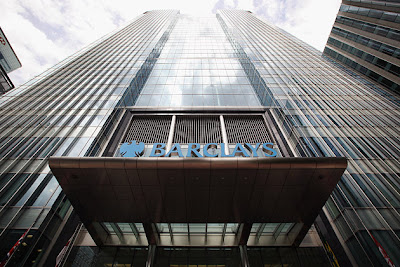 In its final notice, the FSA accuses Barclays of having violated the above stipulations by executing 4 activities:

In my view, this part of FSA’s final notice is the most interesting and best justified part of its decision.

As the FSA clarifies, “the definitions of LIBOR and EURIBOR do not allow for consideration of derivatives traders’ positions.” In case of LIBOR, the definition specifically provides for this fact. In case of EURIBOR, this applies naturally because a submission influenced by derivatives’ traders would obviously reveal a conflict of interest. As a matter of fact, Barclays’ derivatives traders trade OTC interest rate swaps and exchange traded interest rate futures whose payment obligations are oftentimes based on LIBOR or EURIBOR.


Trader C: “The big day [has] arrived… My NYK are screaming at me about an unchanged 3m libor. As always, any help wd be greatly appreciated. What do you think you’ll go for 3m?”

Trader C: “[…] when I retire and write a book about this business your name will be written in golden letters […]”.

Submitter: “I would prefer this [to] not be in any book!”

The FSA goes on concluding that the above described misconduct at Barclays was common and nearly daily practice over a number of years.

When the financial crisis was, between end of 2007 and mid 2009, at its peak level, banks’ liquidity was a particularly important issue. At that time Barclays posted significantly higher LIBOR / EURIBOR rates than its peers. As this fact caused negative publicity for Barclays, the bank felt pressure to submit lower rates. The FSA puts it very nicely:

“Senior Management at high levels withing Barclays expressed concerns over this negative publicity. Senior Management’s concerns in turn resulted in instructions being given by less senior managers at Barclays to reduce LIBOR submissions in order to avoid negative media comment.”

However, reading through this passage of the final notice, I must admit that FSA’s reasoning is much less convincing here.

As a matter of fact, the FSA outlines that Barclays had raised general concerns with the regulators about the accuracy of LIBOR submissions.

In addition, it mentions that interbank-lending was pretty much limited during that time. As a consequence, a correct price finding was certainly very tough, if not impossible. In my view, there is a natural tendency in such an illiquid market to set prices according to those set by peers, and Barclays can only hardly be blamed for this.

Reading through this passage of FSA’s decision, I miss a clear demonstration of what Barclays’ specific wrongdoings consisted of. It seems more that the bank followed the other contributing banks than leading the process itself.


3. Violation of FSA principle 3 through systems and control failings

Until December 2009, Barclays had no specific systems and controls in place relating to its LIBOR and EURIBOR submissions processes. The FSA blames Barclays for this lack all the more as the bank had repeatedly received proposed methodologies and draft procedures for LIBOR submitters by BBA’s FX & MM Committee as well as a reminder by EURIBOR regulator EBF to ensure and maintain a systematic and close control of the bank’s daily quotations.

The FSA describes in its decision that LIBOR issues have been escalated to the bank’s compliance functions on 3 occasions and that compliance did not react appropriately. More specifically,

Posted by Florian Lummert at 10:09 PM