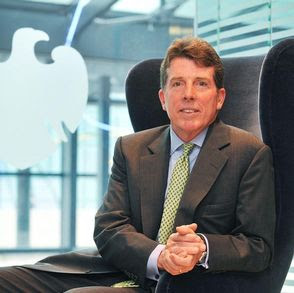 “I joined Barclays 16 years ago because I saw an opportunity to build a world class investment banking business. Since then, I have had the privilege of working with some of the most talented, client-focused and diligent people that I have ever come across. We built world class businesses together and added our own distinctive chapter to the long and proud history of Barclays. My motivation has always been to do what I believed to be in the best interests of Barclays. No decision over that period was as hard as the one that I make now to stand down as Chief Executive. The external pressure placed on Barclays has reached a level that risks damaging the franchise – I cannot let that happen.
I am deeply disappointed that the impression created by the events announced last week about what Barclays and its people stand for could not be further from the truth. I know that each and every one of the people at Barclays works hard every day to serve our customers and clients. That is how we support economic growth and the communities in which we live and work. I look forward to fulfilling my obligation to contribute to the Treasury Committee’s enquiries related to the settlements that Barclays announced last week without my leadership in question.
I leave behind an extraordinarily talented management team that I know is well placed to help the business emerge from this difficult period as one of the leaders in the global banking industry.” 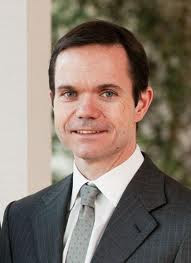 "My 15 years at Barclays have been a time of great accomplishment, both for me personally and for the bank. I am grateful for the opportunities that were provided to me and proud of what we achieved. We built one of the premier global investment banks from scratch – something that we are all very proud of. The firm is as strong today as it ever has been and is incredibly well placed to succeed within the post financial reform competitive landscape. I have every confidence that the Board and Executive Management of Barclays will be successful in executing their plans, and I wish them the best of luck in doing so."


In this article, I would like to analyze the order of the US Commodity Futures Trading Commission (CFTC) adjudging Barclays to pay a civil monetary penalty of 200 MUSD.

The central stipulations for the FSA fine are the following: 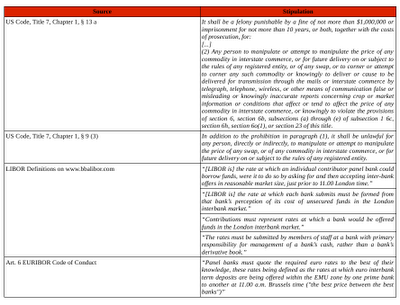 I have discussed the specific obligations that a LIBOR / EURIBOR contributor panel bank must respect, in the previous posts in February 2012.


The CFTC first describes that the persons in charge of submitting Barclays’ LIBOR and EURIBOR rates were very experienced employees, having 25 years and 20 years of experience in the respective money markets. These people acted in an environment that Barclays had not regulated internally: “Barclays did not have specific internal controls or procedures, written or otherwise, regarding how LIBOR / EURIBOR submissions should be determined or monitored. Barclays also did not require documentation or the submitters’ LIBOR determinations.”

The order then describes how Barclays' swap traders influenced Barclays' LIBOR / EURIBOR submitters on a regular basis in order to manipulate the respective base rate. It emphasizes that such attempts were common practice and publicly discussed among swap traders before contacting the submitters: “In fact, traders would often shout across the trading desk to fellow traders to confirm there were no conflicting requests before they sent their requests to the EURIBOR submitters, and, on occasion, the traders discussed their requests with trading desk managers.”

Next, the CFTC mentions that Barclays' swap traders also acted repeatedly on behalf of external (former Barclays) swap traders when trying to manipulate the respective base rate.

Many examples of communications between swap traders and submitters are cited, outlining clearly the ongoing collusion. The examples resemble pretty much those that I have cited in my last post on the FSA's fine on Barclays.


The CFTC first describes the illiquid situation in the London inter-bank money market during the financial crisis. It then goes on by outlining the position that Barclays' LIBOR submitter had taken during that time: As a matter of fact, he had expressed his view that, given the illiquid situation in the money market, Barclays' submissions were “unrealistically low”. However, the quotes of other participating banks being still lower and, therefore, even more unrealistic, he concluded that “if [Barclays] were to submit higher, accurate LIBORs / EURIBORs, then the market or press would report that Barclays was experiencing difficulty in funding itself”. The CFTC emphasizes the negative media coverage on Barclays' constantly higher LIBOR submissions.

To Barclays' discharge, the CFTC recognizes that “certain senior managers within [Barclays] instructed the USD LIBOR submitters and their supervisor to lower Barclays' LIBOR submissions, so that they were closer in range to the submitted rates by other banks but not so high as to attract media attention”. In addition, according to the CFTC, these senior managers “frequently discussed with the USD LIBOR submitters and their supervisors the specific rate to be submitted, in order to ensure they were in compliance with the directive”.

Another important aspect in this section is the fact that BBA representatives and FSA stuff members were in contact with Barclays senior treasury managers at that time and discussed the artificially low rates of certain panel banks. However, according to the CFTC, “Barclays did not disclose at this time that is was lowering its LIBOR submissions pursuant to a management directive”.

The issue of Barclays submitting patently false rates was raised to the compliance function at that time. Nevertheless, the compliance officer in charge did not follow up internally on this issue.


CFTC’s legal discussion is quite short. The emphasis in this case is clearly on the factual side and the legal appreciation is not a major concern here.

Posted by Florian Lummert at 8:35 PM