IFRS and US GAAP - Towards global accounting standards?

On July 13, 2007, the SEC Office of the Chief Accountant has published a staff report on the incorporation of IFRS standards into the financial reporting system for US issuers.

This report has been received negatively by the financial press. On July 15, the Financial Times wrote:

“SEC staff issued a non-committal paper on the subject on Friday that gave no clue as to when an already-delayed decision on possible IFRS incorporation would be taken by the US markets regulator.”

Michel Prada, chairman of IFRS Foundation, is cited as follows:

“While recognizing the right of the SEC to determine the method and timing for incorporation of IFRS in the United States, we regret that the staff report is not accompanied by a recommended action plan for the SEC.”

What is the the report about? As will be explained below, the report contains interesting information about the differences between IFRS and US GAAP and the consequences of an IFRS adoption in the US. However, it does not define what the intentions of the SEC in this matter are and what it intends to do about it in the future.

The report starts off by saying what it is not about:

In the report, the SEC staff raises the following main criticisms against the IFRS accounting system that might cause problem when implementing it in the US:

In addition to the above criticisms, the SEC staff sticks to some additional issues that might conflict with an IFRS adoption in the US:

A very interesting part of the report is the SEC staff's comparative analysis of IFRS / US GAAP fundamental and minor differences:

The SEC staff has observed fundamental differences in the following areas: 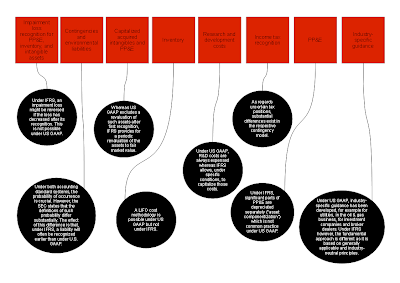 Somewhat minor differences have been identified in the following areas:

Overall, the staff report acknowledges that the current IFRS regulation setting standard serves the organization pretty well and achieves a good balance between the needs of public accountability and the independence of IASB’s standard-setting process.

Some isolated criticisms of the governance structure pertain to

In the staff report, the SEC outlines the major IFRS funding maxims, e.g. broad-based, compelling, open-ended, and country- or jurisdiction-specific.

These characteristics seem to be met: As a matter of fact, IFRS funding relies on

The SEC only criticizes the fact that the IFRS Foundation continues to rely significantly on voluntary contributions from the large accounting firms.

In its report, the SEC staff focused on the following 3 components of IASB’s standard-setting process: 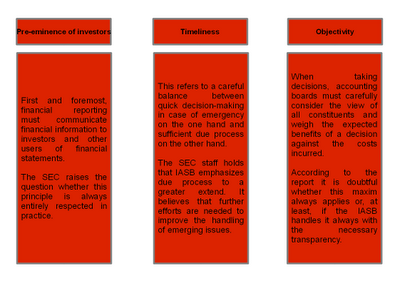 Impact of IFRS on the US regulatory environment

The SEC staff analyzes the impact of an IFRS introduction in the US in great detail. In summary, it holds that

As a general comment, I think that the SEC staff report is very informative as regards the major differences between IFRS and US GAAP as well as the practical consequences of an IFRS introduction in the US. However, I miss a genuine debate on the question whether to implement or not to implement IFRS in the US. As a matter of fact, the SEC writes a lot about the consequences and costs of the introduction. However, I cannot find any substantial argument of the SEC against the adoption itself. The question then remains: Why is there no specific time table for the introduction of IFRS in the US?

Posted by Florian Lummert at 6:46 AM