On July 26, 2012, Fitch Ratings has published an interesting report on the US money fund exposure to European banks.

The report shows that, since end of May 2011, the exposure of US prime money market funds towards Euro-zone banks has decreased by 78 %. In the case of France, the decrease attains even 88 %.

As you can see on the graph below, the exposure to French banks is in line with the overall exposure to Europe, even though Germany and the UK are less impacted by the US investors' distrust. 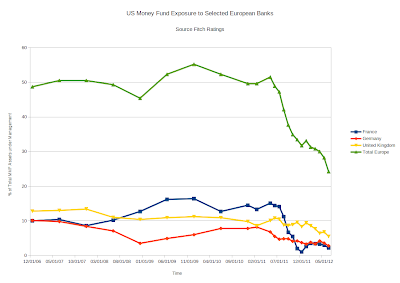 According to Fitch, “the declining MMF allocations to Euro-zone banks are at least partly a reflection of ongoing investor concern about the region”.

Let's now compare the divestment trend of US money markets since last summer with the stock prices of the major French banks BNP Paribas, Crédit Agricole, and Société Générale. 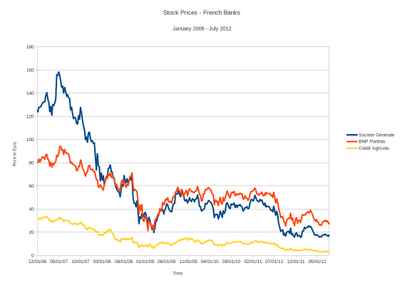 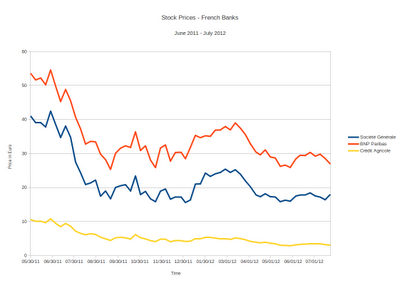 As you can see, the divestment of US money market funds has, amongst other things, triggered a tremendous decline of the stock prices of BNP Paribas and Société Générale.

How do the French banks respond to the mistrust of US investors and the decline of their stock price? 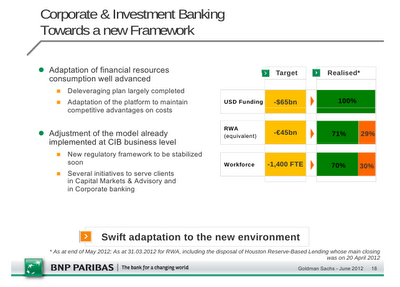 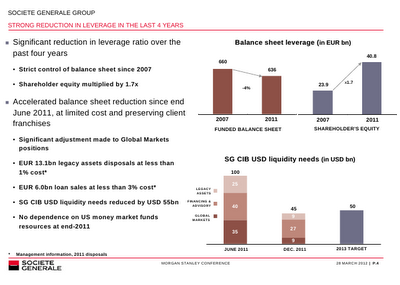 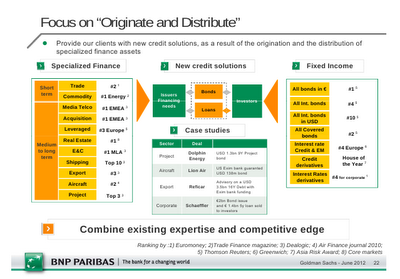 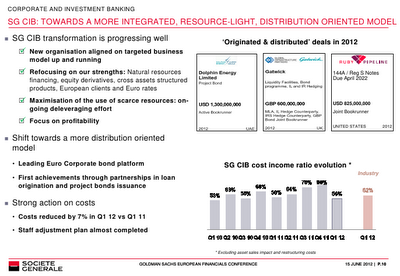 The second response relates to a return to the so-called “Originate to Distribute” (OTD) business model. The basic idea here is that the banks reduce their funding needs in USD by reducing / stopping the issue of USD denominated loans to clients. Instead, the banks will carry out advisory activity and coordinate the direct relationship between their clients and third party investors. 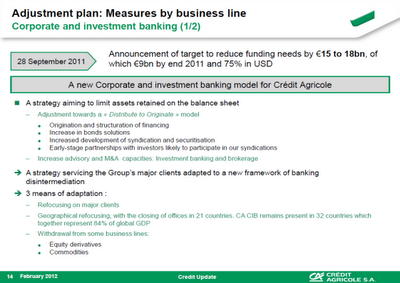 As you can see, Crédit Agricole is especially innovative as it distributes first and then originates... Errare humanum est! There are simply too many presentations to be prepared and held today!

More specifically, the French banks intend to focus on

In my view, the term “originate to distribute” does not seem entirely appropriate for the strategic shift that the above banks intend to carry out.

As the name indicates, the OTD model refers to a business model according to which banks do not hold the credit assets they originate until maturity, but distribute them to different types of investors through the issuance of structured finance products (e.g. securitization) or simply through syndication.

The simple advisory activity involves no origination at all and, therefore, the model as such does not apply to this business situation.

The naming of this strategy is all the more surprising as the OTD model has not enjoyed a good reputation in the recent subprime crisis. In this regard, the European Central Bank has carried out, in 2008 an interesting stakeholder analysis from an agency theory perspective.

Expanding on the ECB's findings in the subprime mortgage context, the main stakeholders, incentives, and interests in the OTD model envisaged by French banks are the following: 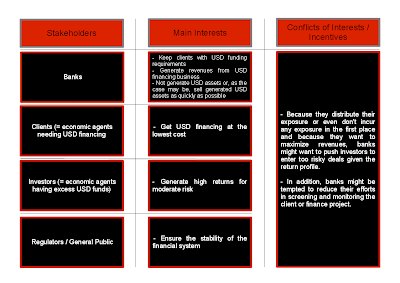 To address the above described conflict of interest between the banks and the other stakeholders, the following measures can be put in place:

Posted by Florian Lummert at 10:05 PM