“We don't hide anything in the nuclear industry!“ - A visit in EDF's Nuclear Power Plant in Nogent-sur-Seine


Last Tuesday, I woke up early. At 6h50 A.M., I had a meeting at Porte Maillot with my HEC EMBA Energy Major fellows to take a bus to Nogent-sur-Seine to visit EDF's nuclear power plant (NPP) in Nogent-sur-Seine.

After roughly 2 hours in the bus, it is now 9h50 A.M. and I am sitting in a conference room in Nogent-sur-Seine. A charming blonde women introduces herself: „My name is Anne-Sophie – Welcome to EDF!“ Outside, it is cold and cloudy. It starts raining. Nonetheless, the Anne-Sophie is smiling all over her face.

Sometimes, my brain thinks faster than it actually should: „Anne-Sophie, well-dressed and probably around 30 years old, must undoubtedly work in EDF's marketing or communications department. She will now tell us how great EDF and nuclear power are.“

EDF and its focus on nuclear energy

„What is EDF doing?“, asks Anne-Sophie and gives herself the answer: „the whole range of energy products, from generation, over transmission and distribution, over marketing, to trading.“

Then she decribes EDF's nuclear energy stance in France: 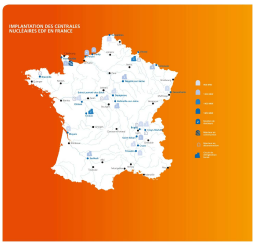 Supplementary to nuclear energy, EDF is also one of Europe's leading producer of renewable energy. This will be the only time Anne-Sophie talks about energy forms other than nuclear. This seems logic – After all, we came to visit a nuclear power plant!

Functioning of a pressurized water reactor

The NPP in Nogent-sur-Seine consists of three separate circuits:

On sight, we can distinguish these three cycles easily, as they correspond to the 3 buildings (reactor, turbine building, and cooling tower) of each unit of production. 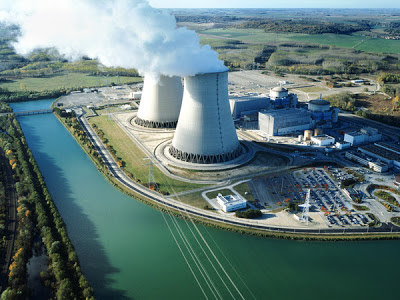 Anne-Sophie describes the nuclear chain reaction which happens in the reactor.

I admit that I don't really understand what she is talking about. At the same time, I start feeling bad. No, Anne-Sophie cannot belong to the marketing or communications department... Can these people explain a nuclear chain reaction? Probably not – Shame on me!

The next topic in Anne Sophie's presentation is the production and charging of uranium fuel. Showing pictures and citing figures, she expands on the steps of nuclear fuel production: 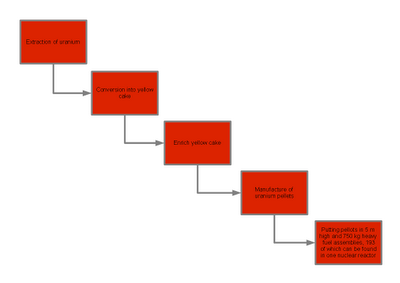 One nuclear reactor contains 110 tons of uranium; the service life of a fuel assembly and its uranium is 5 years. 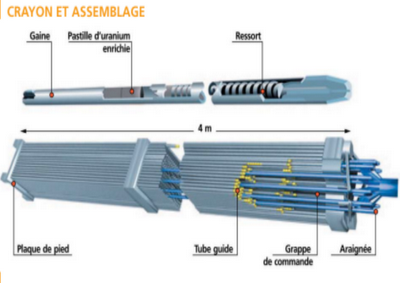 At this stage of her presentation, Anne-Sophie has definitely convinced me. Forget about marketing and communications! She must be an engineer!

Unfortunately, it is just a few minutes after having convinced me that Anne-Sophie pronounces, still smiling, this phrase that will definitely disclose her real identity: “We don't hide anything in the nuclear industry.” I turn to my group and see many people smiling. They suddenly seem to trust Anne-Sophie less than before...

It's time to go for a walk. Before facing the rain outside, I take helmet, earphones, and earplugs. Our group is subdivided in two groups. Disappointed by Anne-Sophie, I join the group lead by Alexandre.

The earphones turn out very useful. Everybody can easily walk around and follow Alexandre's explanations without gathering constantly next to our guide but still understanding only half of his talk.

First some basic facts: 900 people on sight during operations, up to 2,000 people during outage, due to fueling and maintenance.

We arrive at the security checkpoint. Each of us validates his badge and, in addition, enters his specific security number.

After crossing the checkpoint, you can read the slogan “Sûreté et Sécurité: Nos priorités pour mieux produire” which means “Safety and Security: Our priorities to better perform.”. Not being an engineer, I ask a colleague what is the difference between safety and security. “Safety is for people, security is for material”, is his short answer – or was it the other way around? Anyway, I got the message: “Don't worry, nuclear energy is safe because everybody pays attention to what he is doing here.”

When walking towards the cooling tower, Alexandre has another way to explain the functioning of the nuclear power plant: “Thermal energy is transformed into mechanical energy which is then transformed into electrical energy”. That seems easy, even for me.

We arrive at the cooling tower of the first unit. Standing in front of it, it is simply huge! Alexandre adds some figures:

The cooling tower is build on 20 m high pillars. On the bottom, it is partially open to guarantee an efficient flow of air inside the tower.

The next step of our visit leads us into a factory that is approximately 100 m long. Inside, we can see a tremendous yellow box containing the 57 m long turbine. As maintenance works will start soon, the case is sparsely open and we can see the turbine running inside. Alexandre tells us that the steam must have a constant pressure of 70 bar to produce electricity of 50 Ohm.

“Unfortunately”, reactor and control room cannot be visited. That's why we face again the rain outside and our visit will finish soon. Before leaving the site, everybody has to pass through a control system to be sure that nobody has captured radioactivity.

In two hours, I will be in Paris again. Time enough to think and discuss a little bit about nuclear energy. Whatever you think about it, one thing is clear: Our visit at EDF premises was very well organized, our guides were very competent, and EDF has given a very professional and safe image of its nuclear power plant in Nogent-sur-Seine.
Posted by Florian Lummert at 11:25 AM