Today, a large share of USD lending is done by non-US banks. As explained by Victoria Ivashina, David S. Scharfstein, and Jeremy C. Stein in a recent FRB research paper (See below), this lending activity can be refinanced in three ways:


In practice, wholesale USD funding prevails. This funding method has the consequence that the foreign bank’s USD lending becomes vulnerable to a (perceived) decline of its creditworthiness.

As a matter of fact, money market funds will cut back their exposure vis-à-vis the foreign bank in question. This is what actually happened in 2011 to European banks as a consequence of the expanding crisis in the Eurozone.

At the same time, the bank’s retail funding in its home market remains unaffected, due to a better reputation in its home market and, above all, the home country’s public deposit insurance in place. In theory, the foreign bank should, therefore, shift to synthetic funding to make up for the shortfall of its wholesale USD funding.

However, in practice, synthetic USD funding turns out to be more expensive than wholesale USD funding. As the authors explain in their paper, this is due to a violation of the covered interest parity (CIP).

As a matter of fact, if interest rate parity holds, the USD forward price would only depend on the interest differential:

However, this relationship will be affected negatively by a large surge in demand for FX forwards and by a limited capacity on the part of arbitrageurs to post collateral related to such forwards.

As a consequence, USD lending by the foreign bank will decline, relative to its home currency lending.

To better understand the context of the above discussion, I have gathered some data. A a caveat, the data below does not always relate specifically to USD Lending. However, it still gives a good overview over the issues at hand. 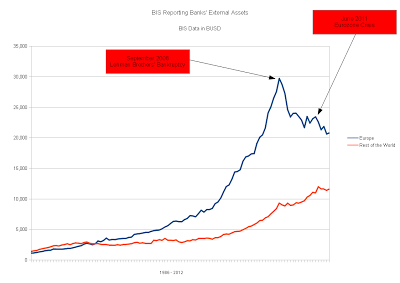 Until the financial crisis, European banks have substantially increased their external asset positions. Recently, the Lehman Brothers’ bankruptcy and the Eurozone crisis have lead to a 24 % decrease of such exposure. 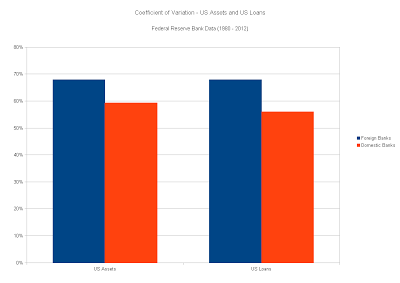 As a matter of fact, US assets and loans of foreign banks are less stable over time, compared to those of US banks. 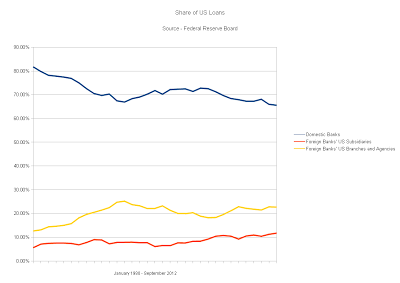 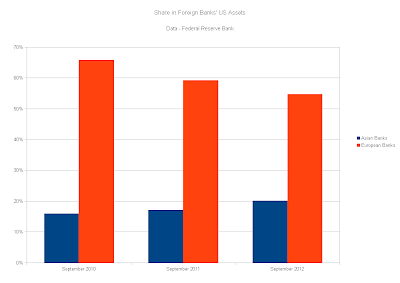 This graph shows quite well the shift of foreign banks' US assets from European banks to Asian banks.

Posted by Florian Lummert at 9:39 PM