UK Banking Reform – A new structure for stability and growth?

The government suggests that an implicit state guarantee distorts incentives of managers and creditors, encourages them to take excessive risk and leverage. Moreover, the guarantee is said to distort competition in the banking sector to the detriment of small banks.

At the heart of current reform discussions is the government's intention to ring-fence core retail deposits from excluded wholesale and investment banking activities. The legislator expects such separation to

Inside or outside the ring-fence?

The ring-fence is a nice illustration used by the UK legislator:


“The ring fence must be robust against attempts by banks to subvert or undermine it.”

“The ring fence cannot be susceptible to erosion over time.”

“Banks may seek to test the strength of the ring-fence.”

“In the absence of the Commission's proposals to electrify the ring-fence, the risk that the ring-fence will eventually fail will be much higher.”

The underlying message of this picture is clear: Inside the ring-fence are the good boys who need to be protected from the bad boys outside the ring-fence. This vision seems a bit simplistic but can certainly be sold very well to the general public.

Directors of ring-fenced banks shall be held personally liable for preserving the integrity of the ring-fence. 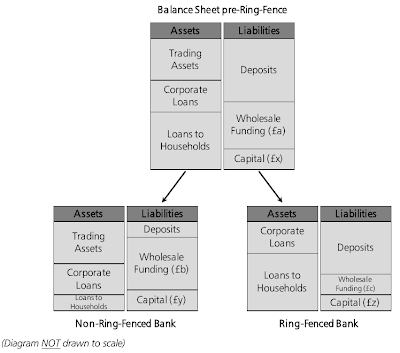 As can be seen in the above schema, a ring-fenced bank will no more carry trading assets on its balance sheet. With regards to derivatives, the regulation proposal says that ring-fenced banks can sell these instruments if


However, it is not yet clear whether proprietary trading activities should be banned altogether from a group containing a ring-fenced bank: “The Government will consider carefully any further recommendation from the Parliamentary Commission on Banking Standards (PCBS) on this topic.”

The current proposal advocates that proprietary trading activities may only be carried out in non-ring-fenced banks.

However, the above schema shows that these banks may still be allowed to carry out lending activities. Deposits with non-ring-fenced banks may also be allowed if