US Department of Justice vs. S&P – Scheme to defraud or healthy work-place discussions?

Almost 6 years after the outbreak of the financial sub-prime crisis in the US, we are still searching for the culprit. The banks? The rating agencies? The investors? The Borrowers? The US Government? All of them?

Currently, the focus is again on rating agencies. In a recent complaint introduced against S&P, the US Department of Justice accuses S&P:

“S&P, knowingly and with the intend to defraud, devised, participated in, and executed a scheme to defraud investors […].”

“With much fanfare, a parade of senior officials congratulated one another for their efforts – the hundreds of subpoenas they had served, the thousands of hours their team had devoted to the case, the millions of documents they had read. Notwithstanding all the back-slapping, the Government’s Complaint fails to state a claim.”

Let's take a closer look at the arguments of the parties:

Claimant's memorandum starts off describing what and how S&P has rated in the run-up to the sub-prime crisis: 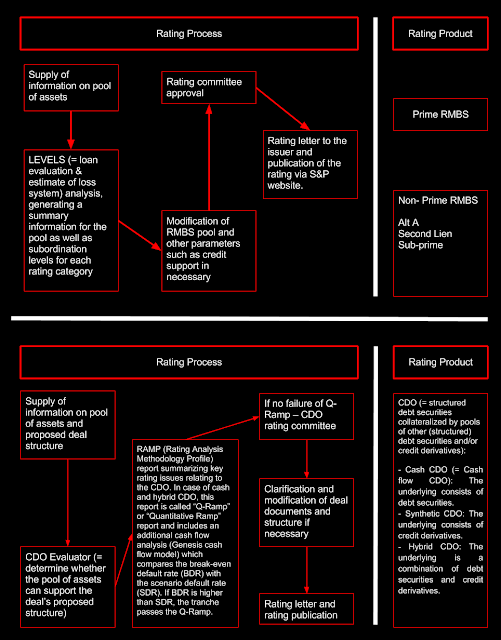 Which laws has S&P violated, according to claimant?

First,there is United States Code (USC) 18 § 1341. If you want to crucify yourself, keep on reading the whole paragraph. If not, just have a look at the passages in red which capture the essentials:

Whoever, having devised or intending to devise any scheme or artifice to defraud, or for obtaining money or property by means of false or fraudulent pretenses, representations, or promises, or to sell, dispose of, loan, exchange, alter, give away, distribute, supply, or furnish or procure for unlawful use any counterfeit or spurious coin, obligation, security, or other article, or anything represented to be or intimated or held out to be such counterfeit or spurious article, for the purpose of executing such scheme or artifice or attempting so to do, places in any post office or authorized depository for mail matter, any matter or thing whatever to be sent or delivered by the Postal Service, or deposits or causes to be deposited any matter or thing whatever to be sent or delivered by any private or commercial interstate carrier, or takes or receives therefrom, any such matter or thing, or knowingly causes to be delivered by mail or such carrier according to the direction thereon, or at the place at which it is directed to be delivered by the person to whom it is addressed, any such matter or thing, shall be fined under this title or imprisoned not more than 20 years, or both.

Additionally, the US Department of Justice invokes USC 18 § 1343. This stipulation captures the same idea as above, but applies it to wire transfers instead of postal services.

Finally, the applicant accuses S&P of bank fraud under USC 18 § 1344. The clause reads as follows:

How has S&P violated the USC? Claimant's argument goes like this:


S&P's status as a nationally recognized statistical rating organization (NRSRO) is of special importance for the the first two bullet points. As a matter of fact, this status required S&P to have internal policies and procedures to address and manage conflicts of interest on the one hand, and, on the other hand, allowed publicly regulated funds to invest in securities rated by S&P.

The third point of the argument is obviously the most interesting and, therefore, longest part of the complaint. The US Department tries to proof S&P's bad faith mainly by describing how S&P dealt internally with conflicts of interest and the declining sub-prime mortgage market:

On a purely legal side, S&P says that the above facts, even taken for granted, are not actionable as fraud. As a matter of fact, they reveal subjective statements (how employees should behave) rather than objective facts which are the only facts actionable under the cited USC stipulations.

In addition, it says that claimant's statements are too general and vague to constitute the basis for a fraud claim: “Courts have held that internal squabbles about appropriate rating methodology are insufficient to establish that a particular rating is “false” or “not believed” by the rating agency.”

Finally, S&P denies having acted with a specific intent to defraud. The firm differentiates between investors (who rely on S&P's ratings) and issuers (who pay for S&P's ratings) and says that the complaint mixes both by stating that S&P directed its fraud against investors who, nevertheless, were not the people paying for the ratings.

As regards the facts, S&P simply ensures that “any disagreements within S&P are evidence of the robust debate that does and should take place in any large and diverse work place – not evidence the entity was engaged in a scheme to defraud. […] Even taken as true for the purpose of this motion, they reveal a robust internal debate among S&P employees about the likely future performance of complex financial instruments at the beginning of what turned into a global economic tsunami.”

The complaint is interesting to read, namely the rating process is very well described. However, on the merits, I didn't find it convincing. Let's wait for the outcome of this trial.

Posted by Florian Lummert at 12:18 AM