Daron Acemoglu and James A. Robinson have asked themselves the question “Why are some nations rich and some others poor?” Their short answer is “Inclusive political and economic institutions”.

The book is written very vividly and its clear language makes it accessible to both experts and nonprofessionals. Even though it is not exactly structured this way, the authors discuss three topics: Economic theories that cannot explain economic prosperity (1), theory proposed by the authors (2), and undermining historical references and contemporary examples (3). 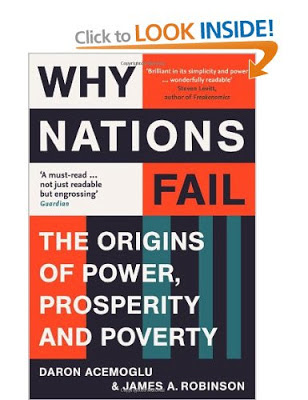 According to the cultural hypothesis, religion, beliefs, values, and ethics are linked to prosperity. “Some populations simply lack a good work ethic.”
The authors raise two main arguments against this hypothesis:
First, cultural patterns are oftentimes identical in frontier regions, although the economic performance of the states involved can differ substantially. Mexico and the USA as well as North and South Korea serve as examples here.
Second, by definition, cultural patterns change only slowly. As a consequence, they cannot explain rapid growth such as the development China experiences today.

Followers of the ignorance hypothesis say that poverty exists because some rulers simply don't know how to make their country rich.
Acemoglu and Robinson argue that ignorance can, at best, explain a small part of world inequality: “It’s not ignorance but oftentimes political strategy to sustain an undemocratic regime that is at the origin of wrong economic policies.”
In addition, the ignorance hypothesis can only explain poverty, not prosperity.

Acemoglu and Robinson argue that, to prosper in the long run, countries need inclusive economic and political institutions.

Inclusive economic institutions create a level playing field for and encourage every citizen to participate in economic activities. They are characterized by

Most important for inclusive political institutions is a pluralistic society: Political power should be distributed widely and checks and balances among institutions should prevail. On the other hand, to dispose of political power at all, a state must be sufficiently centralized.

As opposed to inclusive institutions, extractive institutions are designed to extract income and wealth from a subset of society to benefit a different subset.

Why do not all countries in the world adopt inclusive institutions then? The reason is linked to the lack of innovation that arranges the elite of a country. Obviously, innovation leads to creative destruction. In other words, it replaces the old by the new and, thereby, creates winners and loosers and redistributes wealth. If you have power and money today, this is exactly what you want to avoid.

To justify their above theory, the authors describe many relevant historical examples:

The above list of examples is a personal choice; the book offers many other historical references.

What can I criticize? I found the book sometimes a bit repetitive. But that is definitely a minor aspect. Daron Acemoglu's and James A. Robinson's “Why nations fail” is, beyond any doubt, worth reading.

You can find a speech of one of the authors about the book here.
Posted by Florian Lummert at 12:21 AM