Cash Crunch in China! – The People's Bank of China and the SHIBOR rate


On June 24, the People's Bank of China said “the onus is on lenders to better manage their own balance sheet” (Financial Times June 24, 2013). “It [PBC] also said liquidity was at a “reasonable level”, an indication of its reluctance to answer banks' pleas for cash injections to alleviate the market stress.”


Just one day later, on June 25, the PBC made a u-turn, announcing to provide Chinese banks with liquidity if need be. 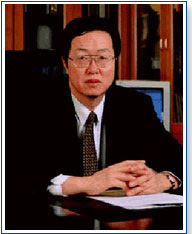 And, again 3 days later, PBC's governor Zhou Xiaochuan, publicly announced: “We will use all kinds of tools and methods to appropriately adjust liquidity and to maintain the overall stability of markets”


But what exactly is SHIBOR and how does it work?


SHIBOR is the interest rate for unsecured interbank RMB lending. Its Code of Conduct regulates SHIBOR in six articles and on roughly one page. To me, this looks great – eventually a regulator who can keep things short! Others might have an opposite reaction – such a short regulation cannot be good!


SHIBOR is regulated by the People’s Bank of China (PBC). It is the National Interbank Funding Center (NIFC), a sub-institution of PBC that does the administrative work.


Every business day, before 11:20 a.m., SHIBOR panel banks submit quotations of borrowing and lending for the following maturities: 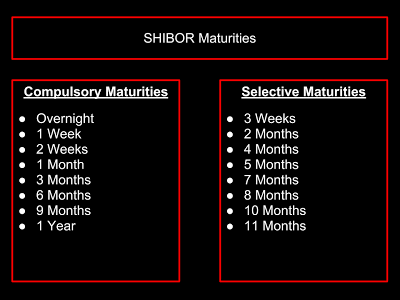 The quotations are based on current market conditions.


Excluding the two highest and two lowest quotations, NIFC calculates the weighted averages of the price quotations. Thereafter, the averages are published on the SHIBOR website, along with each bank’s individual quotation.


A quoting bank must be either primary dealer in the Chinese money market or market maker in China’s FX market. Naturally, a SHIBOR panel bank must be capable to price interest rates, using an internal yield curve and a transfer pricing mechanism.


On the merits the SHIBOR working group considers elements such as transaction volume, transaction continuity, price discrepancy in prior quotations, and the bank’s credit rating.


The SHIBOR working group of the PBC ensures the supervision. This includes evaluating the responsibility of each panel bank.

Posted by Florian Lummert at 11:19 PM