The Bank for International Settlements (BIS) is an international organization that serves central banks and financial authorities. According to its mission statement, it 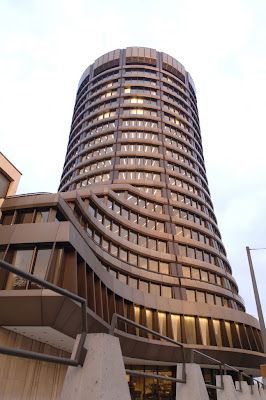 At first glance, one would expect the annual report of such an organization being rather dry and technical. I have read the 83rd annual report, published on June 14, 2013, and definitely confirm that this first impression is wrong.
As a matter of fact, the report contains a good summary and outlook of the current international financial situation as well as many interesting ideas and recommendations. I was also positively surprised by the blunt language. Finally, BIS presents a good mix of numerical information and material arguments. All this makes the report interesting to read.

The paper starts off with a summary of what happened in 2012, from a macro-economic perspective. I will not expand on this here. More interesting are BIS’ recommendations for the future. They relate to four issues:

BIS holds that rigid labor and product markets hinder long-term economic health. The reason is that people cannot move across sectors if markets are not flexible.

“Rigidities in labor and product markets are among the most important obstacles standing the way of long-term economic health.”

More specifically, the service and construction sector have shrunk substantially during the financial crisis and, today, offer less opportunities for workers. As a consequence, governments should ensure that

“Still existing misallocation of resources among sectors of the economy must be corrected.”

This above described reallocation process is usually called “creative destruction”.

“In the longer run, growth tends to come from new goods and services as well as innovative ways of producing and delivering them.”

If the above process of creative destruction is so obvious – why do governments not act accordingly? BIS gives two reasons:

“Rather, it seems, policymakers act only when their hand is forced.”

“Politicians hope that if they wait, incomes and profits will start to grow again, making the reform of labor and product markets less urgent. But waiting will not make things any easier, particularly as public support and patience erode.”

“Six years after the onset of the global financial crisis, public debt in most advanced economies has reached levels unprecedented in peacetime. And, worryingly, it continues to rise.”

But why specifically are high government debt levels bad? According to BIS, they hinder growth because

Another argument is somewhat surprising: “With low levels of debt, governments will again have the capacity to respond when the next financial or economic crisis inevitably hits.” This might be right, but, to remain politically correct, isn’t the whole work of BIS about avoiding future financial crisis?

“Finding the way to medium- and long-term fiscal sustainability remains a key challenge.”

So, which government debt thresholds are suited? According to BIS, advanced economies are safe up to 60 % of GDP; emerging market economies should not go beyond 40 % of GDP.

“Structural fiscal problems have to be tackled early. Doing so means avoiding much more pain later.”

Finally, the bank insists on the urgency for carrying out reforms: Reform fatigue might lead to politicians abandoning essential reforms.

Resilience of the banking and overall financial sector

BIS touches upon all of the current hot reform topics, i.e.:

On the first topic, BIS discusses namely internal risk models. The bank recognizes that they can be highly variable from one bank to the next, in particular due to

In view of these shortcomings, risk-weighted capital ratio and liquidity ratio are complementary:

“Together, they [risk-weighted capital ratio and liquidity ratio] reinforce each-other, generate more information on the riskiness of the business of the bank, and are more difficult to be manipulated.”

In the same vein, capital adequacy and leverage ratio should, in BIS’ opinion, work together.

“Harnessing the complementary strengths of the two ratios [capital adequacy and leverage] provides an effective response to the practical and theoretical shortcomings in risk measurement.”

With regard to bank structure regulation, BIS approves the goals of risk isolation and reduction of moral hazard. However, the bank seems rather critical, pointing to the danger of unintentional shift of financial intermediation activities outside the perimeter of consolidated supervision and to unclear interaction with other regulatory reform projects.

Reform process for the financial sector

More generally speaking, BIS defends the complexity of financial reforms, saying that “details are enforceable, principles are not”. This is actually one of the few statements in the report that I don’t agree with. In my view, the opposite is true: It’s only when you get the principles right that you can enforce details. The reason is that, in real life, the details are unfortunately never the same details that you predicted beforehand.

Related to complexity is BIS’ call for a genuine increase in loss absorption capacity as opposed to mere optimization of risk-weighted assets through redesigning transactions (“window dressing” – to use the terms of BIS). I think that, de facto, both are linked: The more complex you make it the more loopholes you will create. It’s more difficult to escape from guiding principles.

“With many elements of the new standards [of reforms of the financial sector] already in place, emphasis is gradually shifting to monitoring the pace of implementation.”

“The longer the current accommodative conditions persist, the bigger the exit challenges become.”

“We are past the height of the crisis, and the goal of policy today is to return to strong and sustainable growth.”

As central banks’ balance sheets have grown massively, both in absolute terms (worldwide 20 trillion USD) and in terms of percentage of GDP (worldwide 30 % of GDP), BIS focuses on how central banks should exit from accommodative monetary policies. The challenge will be to strike a balance between the risk of exiting prematurely and the risk of exiting belatedly. Beyond timing, communication will be another key aspect to make the exit as smooth as possible.

In BIS’ view, two elements characterize the relationship between central banks and governments:

“History has shown that monetary policy decisions are best when insulated from short-term political expediency considerations, hence the importance of operational autonomy.”

Second, central banks can only influence on the framework of economies; they cannot, however, change the fundamentals.

“Our message is simple: authorities need to hasten labor and product market reforms to boost productivity and unlock growth; the private sector must deleverage and the public sector needs to ensure fiscal sustainability; risks in the financial system need to be managed; and the expectation that monetary policy can solve these problems is a recipe for failure.”

Posted by Florian Lummert at 7:35 AM