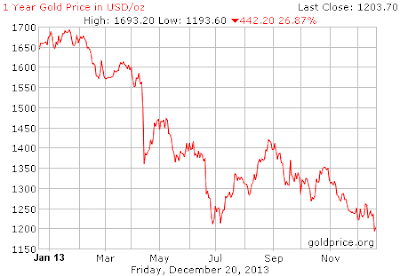 On financial markets, the Bitcoin virtual currency bubble grows and the gold price falls significantly; other commodities (including WTI and Crude Oil) follow.

In the Eurozone, financial fragmentation is gaining place: Southern SMEs pay significantly higher financing costs than their Northern peers; the spread is around 3-4 %. The ECB leaves interest rates stable at 0.75 % but signals a willingness to lower the rate, given current inflation below 2 % and high unemployment. Portugal faces political problems: Its constitutional courts rejects austerity measures necessary for the country to meet deficit-reduction targets. As a consequence, the country's next 2 bn Euro installment of its 78 bn Euro bailout facility will be postponed. Ireland obtains longer repayment periods for paying back the its bailout loans. Greece is on track for meeting financial targets of its bailout line and will receive the next tranche payment on time. Finally, Fitch downgrades the UK to AA+.

Bankers' bonuses are again in the financial news: London fears it could loose attractiveness for foreign banks due to stricter bonus restrictions in Europe. Commerzbank looses a legal battle before the U.K. Court of appeal and must pay 50 MEUR bonuses to 104 bankers related to their 2008 (good or bad?) performance.

On the regulatory side, banks lobby for carving out trade finance from new Basel III rules. They argue that trade finance carries very low risk and default rates. The U.S. FED suggests leverage standards above the minimum 3 % suggested by Basel III regulation.

Any litigation or bank scandal in April? Yes, the German Bundesbank investigates against Deutsche Bank; the institution could have hidden credit derivatives' losses during the financial crisis. RBS is sued by shareholders who have lost money in a rights' issue in 2008. They complain about untrue and hidden material information in the bank's prospectuses.

In Asia, China's president Xi Jingping promises to ameliorate the business conditions for foreign companies operating in China. At the same time, Fitch downgrades China from AA- to A+.

The IMF starts off the tapering debate as the fund warns that extraordinarily loose monetary policies might create the next credit bubble.


Portugal plans austerity measures; the Government intends to cut government spending by 6 bn Euro over the next four years. Fitch upgrades Greece from CCC to B- and Greek 10Y government bonds fall by 1 % to 8.2 %. The EU stability and growth pact is in the news, because France, Spain, and Netherlands will be allowed to disrespect the 3 % budget deficit rule. The WTO announces that Brazilian Roberto Azevedo will become its new head.

In the banking sector, Santander thinks about floating its auto loan subsidiary Santander Consumer USA. Negative news comes from Germany: Commerzbank posts a 94 MEUR net loss in Q1 2013 and the financial regulator BaFin announces that German banks are, at the end of 2012, 14 BEUR short of Basel III capital. Barclays is said having paid bribes to a member of the Saudi royal family to obtain a banking license in Saudi Arabia. JP Morgan stakeholders discuss whether Jamie Dimon should continue combining the CEO and Chairman role. To make a long story short: Yes, he should and will! The Bank of Spain asks Spanish banks to further write down their loan portfolios with regard to Spanish borrowers. Later in May, Spanish banks report 10 BUSD additional bad loan provisions. They promise to stop their "extend and pretend" practice (a nice expression to describe too low provisions...).

Another hot topic in May is international taxation rules. Luxembourg blocks an update of the EU saving directive about EU tax sharing rules. The EU opens negotiations of a tax treaty with Switzerland: Core of the negotiations will be automatic exchange of information. The EU proposes a bonus cap regulation: Without shareholder approval, bonus payment should only be possible up to twice the fixed salary.

On financial markets, FOREX revenues for investment banks are down, due to fierce competition. A senior BNP trader leaves the company after causing a loss of 10-25 MUSD. Finally, LIBOR will probably be replaced in 2014 by a dual-track system, based on survey-based lending rates and transaction-linked indices. The NYSE experiences a flash crash on May 17, as Anadarko Petroleum stock moves from 90 USD to 1 cent within the blink of an eye.

In the lending market, covenant lite loans to highly indebted companies have increased to more than 50 % of total leveraged debt, as investors search for higher returns.

The most important news this month comes from the U.S. FED; it announces the beginning of the end of its bond repurchase programs. 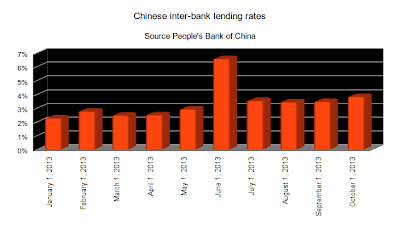 UBS is under investigation in France for having solicited clients to evade taxes. HSBC faces a civil lawsuit in the US for having violated a law providing for negotiating with mortgage home-owners to avoid foreclosure. BNP Paribas plans merging its US retail subsidiary Bank West with its U.S. CIB business to improve its capital and funding efficiency in the US and to counter upcoming regulatory reforms ins the U.S. Jamie Dimon comments on the London Whale scandal: “There was no hiding, there was no lying, there was not bullshitting. Period.” Stephen Hester announces his resignation as CEO of Royal Bank of Scotland and a further 2,000 headcount cut in the investment banking unit. Co-operative bank outlines its restructuring plan that includes of a 1.3 bn Sterling debt bail-in of junior bondholders. In France, UBS must pay a 10 MEUR fine for violation of money laundering regulation. Finally, European banks’ senior debt issues are at lowest levels since 10 years, due to investors’ fears about regulatory bail-in schemes.


On financial markets, U.S. hedge funds consider leaving the EU as a result of the upcoming AIFM directive. Securitization of car loans slumps in the U.S, because Lenders find other cheap refinancing sources such as customer deposits or secured borrowing. Due to a crisis in the government's coalition, Greek government bond yields rise sharply (75 bps). Finally, Italy faces a potential loss of 8 bn Euro on its interest rate derivatives portfolio and has launched an investigation, including the banks which have sold such derivatives.

The IMF says the first 110 BEUR Greek bailout was based on too optimistic growth assumptions. The fund considers that an upfront debt restructuring could have been a better option. The G8 debates the three t's – trade, tax, and transparency.

The European Commission plans to terminate self-regulation of LIBOR and to put the inter-bank rates under the administration of Paris-based ESMA. ECB's outright market transactions (OMT) are subject to a court hearing in Germany's constitutional court. Cyprus president Nicos Anastasiated wants to overhaul the country's bail-out package, saying that it harms the economy too much.

Eurozone's finance ministers come a step closer to the European banking union as they agree that the EU ESM will have the right to invest in struggling banks, if the member state in question also makes a capital investment. Later in June, EU finance ministers cannot agree on how much flexibility member states should have when avoiding own domestic banks' failures.

Central banks play a major role in June: Ben Bernanke announces the end of the FED's quantitative easing program for mid 2014, when unemployment will be at 7 %. In Europe, Mario Draghi says an exist of the ECB from the exceptional monetary policy measures remains distant. Credit crunch in China! The Chinese central bank first refuses to pump liquidity into the system to address long-term overheating of the financial system. A few days later, it makes a u-turn and says that it will support Chinese banks with liquidity if need be.
Posted by Florian Lummert at 11:25 PM