The leverage ratio under Basel III – Why all kids like spinach!

Imagine you have a sore throat. You ask your doctor to have a look. He prescribes you a standard medicine and sends you back home. A week later, it’s not only your throat that hurts. You also suffer from earache and fever. How is that possible? You simply haven’t told your doctor that you were in bad physical shape and felt ill since a long time. If he had examined your whole body, he would had perhaps have detected your additional health problems and prescribed additional medicine...

The leverage ratio does exactly that: It doesn’t stop at measuring risk-based capital ratios but checks a bank’s balance sheet entirely.

For the Basel Committee, a major problem of the 2008 / 2009 financial crisis was the “build-up of excessive on- and off-balance sheet leverage while apparently maintaining strong risk-based capital ratios”. This is why the leverage ratio is now introduced as a complementary capital requirement. It is meant to be simple, transparent, and non-risk based.

The Basel III leverage is not intuitive. As you can easily grasp from the above, leverage is something bad that we should avoid if we want to benefit from a safe financial system. Why is it then that the Basel Committee prescribes a minimum leverage ratio of 3 %? The answer lies in the definition of the ratio:


This definition is comparable to defining spinach as pasta and then saying that all kids like spinach! 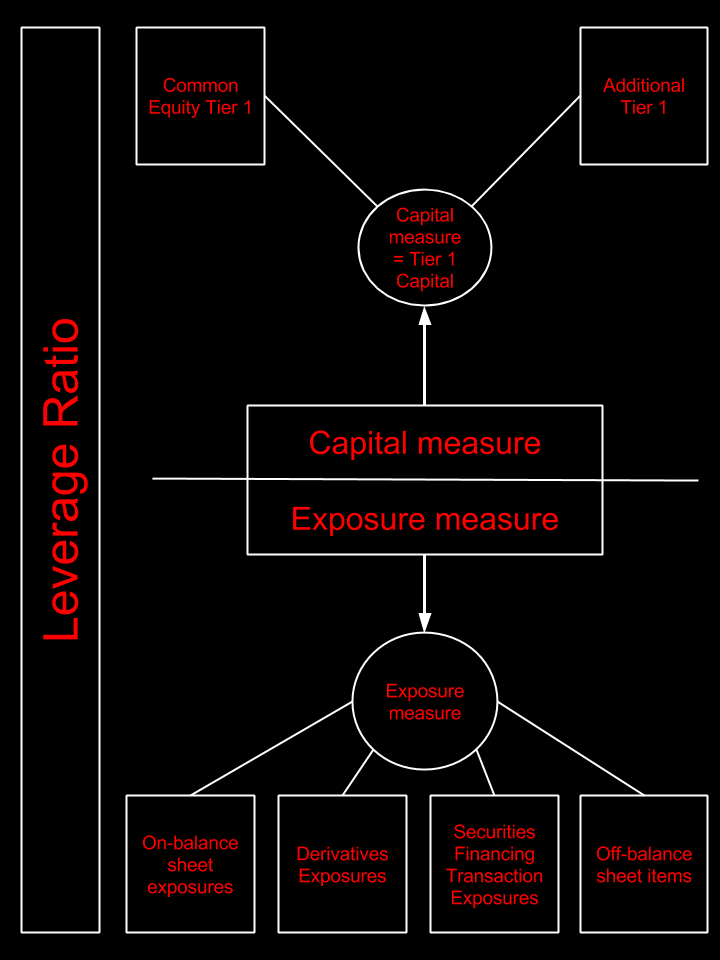 The capital measure has not changed in BIS' recent publication. It corresponds to Tier 1 capital which is the sum of

“A simplistic leverage ratio would create a perverse disincentive for banks to hold risk-free or very low risk assets such as cash or government securities.”
Timothy Adams – Institute of International Finance – 11 October 2013


New is only the definition of the exposure measure. It now captures


In general, the exposure value corresponds to the pure accounting value.

On-balance sheet exposures are all balance sheet assets, including on-balance sheet collateral and collateral for SFT. Except for derivatives, they are measured net of specific provisions and accounting valuation adjustments. However, a netting of loans and deposits is not allowed and assets shall not be diminished by collateral or other forms of guarantees provided to the bank.


“Unfortunately, as good as simplicity is as a goal, we need both leverage and risk-weighting as compensating factors.”
Rodgin Cohen – Sullivan Cromwell – 12 October 2013

Generally speaking, collateral that the bank provides or receives shall not affect the institution’s exposure under the derivative. Only if collateral has been received in the form of cash, it might reduce a bank’s derivatives exposure, subject to five cumulative conditions:


National regulators can tweak the above calculation if the parties trade the derivative under an eligible bilateral netting contract.

SFT exposures are assets recognized on the balance sheet as securities financing transactions (namely secured lending and borrowing and repurchase agreements). However, banks can deduct two types of assets:


SFT assets are adjusted for counter-party credit risk. The adjustment depends on the type of master netting agreement in place and the fair value of securities received.


“The current debate is not whether there should be a leverage ratio but rather - Should it be the binding constraint?.”
Timothy Adams – Institute of International Finance – 11 October 2013


They are converted into credit exposure equivalents by multiplying the notional amount with a credit conversion factor (CCF) as detailed in the Basel III leverage ratio framework.


The Basel III leverage ratio will have to be disclosed by 1 January 2015.