Sovereign Debt Restructuring Part 1 – “It's not about who got a better deal.”

What happens if a state is about to default on its debt? To say it right away, there is no clear answer to this question. The reason is that there is no international insolvency law that can be imposed on sovereigns.

In absence of a clear framework, restructuring practices have developed. First, these practices depend on the type of creditor involved. This is part of the first post on sovereign debt restructuring. Second, there are two international bodies which have a particular influence on the topic, i.e. the International Monetary Fund (IMF) and the Institute of International Finance (IIF). I will discuss their function in a second post.

“It's not about who got a better [sovereign debt restructuring] deal but what was fair vs. unfair about intercreditor [issues].” Nazareth Festekjian, Citi, 11 October 2013

From a sovereign debtor perspective, it makes a difference whether your creditors are other sovereigns, commercial banks, or bondholders.

1. Dealing with sovereign loan creditors in the Paris club

If a state owes money to another state, this debt is restructured in the Paris club.

What is the Paris club?

“The Paris Club has remained strictly informal. It can be described as a "non institution".”

The Paris club is not a formal organization but only an informal group of sovereign creditors. Hence, it has no specific date of foundation. The first meeting with a debtor country was held in 1956 when Argentina agreed to meet its public creditors in Paris.

The club’s role is to find coordinated and sustainable solutions to payment difficulties experienced by debtor nations. Paris club creditors can hold their claims on other sovereigns either directly as a government or through appropriate institutions, including export credit agencies. However, a debtor country is invited to a negotiation meeting with its Paris club members only after it has concluded an appropriate program with the IMF that demonstrates that the country cannot meet its external debt obligations.

Associated members can actively participate in negotiation sessions, subject to the agreement of permanent members and of the debtor country.

The Paris club has developed two types of restructuring rules: 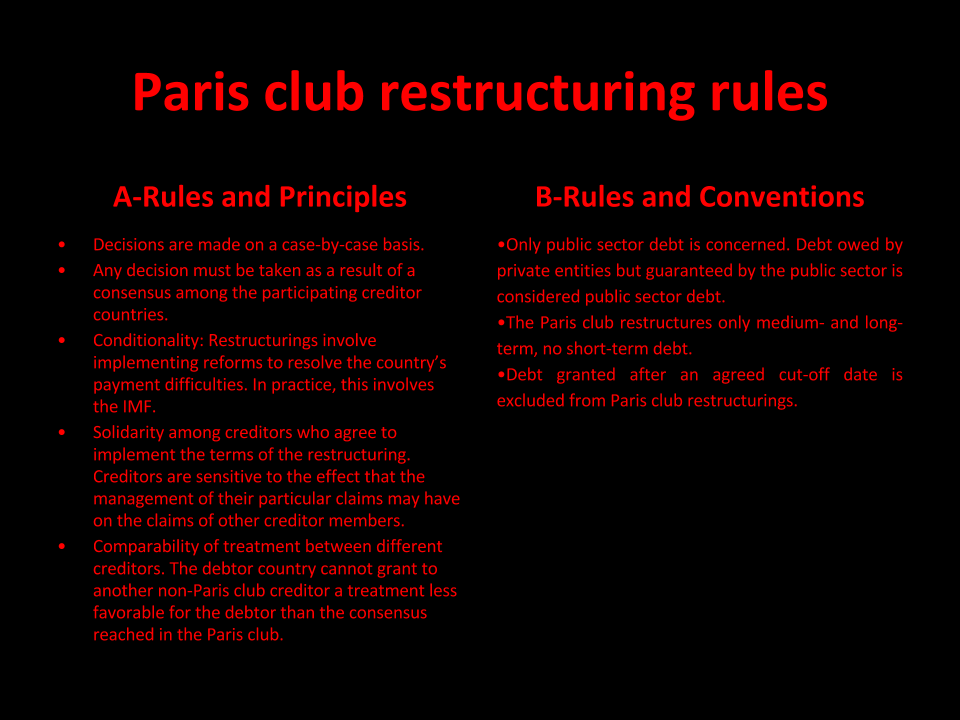 The type of restructuring that the Paris club applies depends on the type of payment difficulty that the debtor country faces. If the debtor country is temporarily unable to pay, although its economic fundamentals are sustainable (This is called a liquidity problem.), creditors will help by rescheduling the debt service. If however, its inability to reimburse is recurring because its debt level is unsustainable (This is called a solvency problem.), rescheduling of the debt will be carried out on concessionary terms, canceling debt partially. 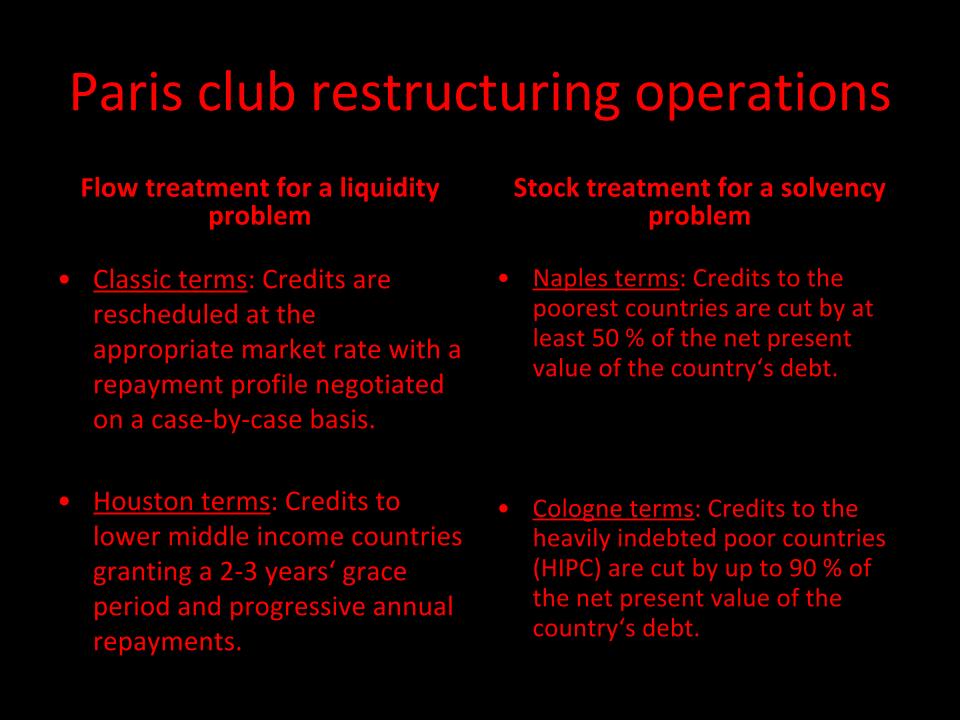 If the Paris club is a “non-institution”, the London club is a “non-club”. As a matter of fact, the London club gathers only for each restructuring and unifies the commercial banks that have lent to the particular debtor. As a consequence, there is no permanent membership or club structure at all. The term “London club” simply exists because significant restructurings of commercial bank debt with emerging market countries (Peru and Zaire) took place, in 1976, in London. Today, renegotiations of commercial bank debt with sovereigns don’t even take systematically place in London.

On the merits, common features of any London club restructuring include

“A decade ago, we were dealing with the beginning of [the sovereign debt restructuring of] Argentina. I am not sure whether we are [now] towards the end or the middle or still at the beginning.” (Randal Quarles, Carlyle Group, 11 October 2013)

For a sovereign, dealing with private bondholders is, obviously, more difficult than dealing with loan creditors, simply because the number of investors is much higher. To reach a common agreement with bondholders on a restructuring, two basic approaches exist:

The IMF has developed a statutory approach, i.e. a set of rules which intend to impose a sovereign debt restructuring mechanism (SDRM) on bondholders. The SDRM proposal has six central features:

However, the SDRM remains theory today, as there is currently no majority among UN member states to adopt the mechanism in an international treaty.

The market-based approach consists of inserting collective action clauses (CAC) in bond indentures. These CAC regulate the decision-making for bond restructurings prior to issuing the bond.

Again, nothing of the above is carved in stone, every restructuring can be different. Especially, as countries always have different types of creditors, the mechanisms will have to be combined for a comprehensive restructuring of a country's debt.

Posted by Florian Lummert at 10:08 PM