After the music stopped – “Yet another work about the crisis and its aftermath”?

This is the question that Alain S. Blinder itself asks at the beginning of his book. On the one hand, he is right, and I hesitated reading the book for exactly this reason: Haven't I read enough on this stuff in the past years? But I admit that the book is still worth reading, especially if you are interested in getting an overview of the U.S. financial system and its recent history. 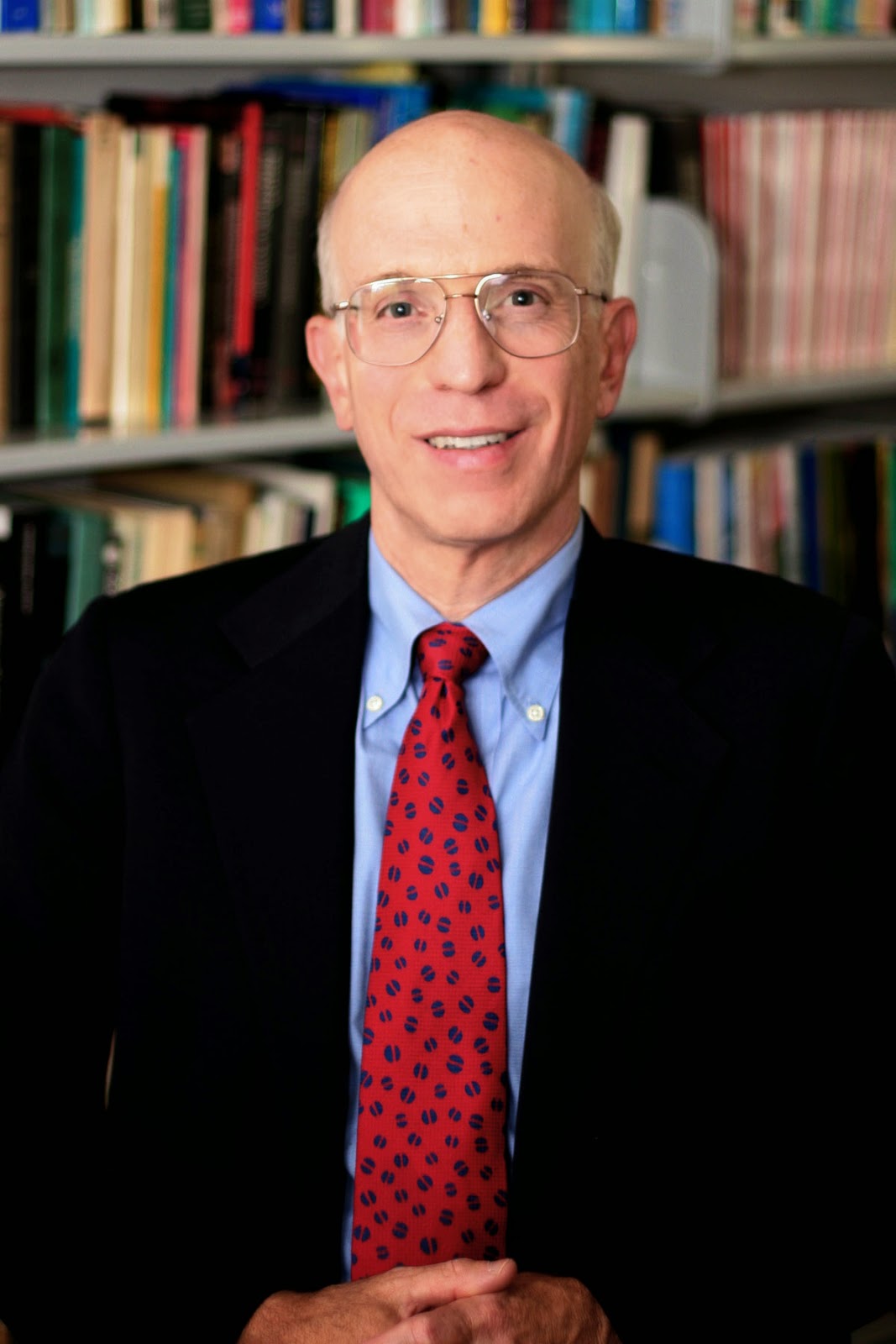 What caused the financial crisis and what we should learn from it.

The book starts off describing the main causes of the 2007/08 financial crisis and finishes describing the lessons we should learn from it. Both topics are linked and, therefore, the elements Alain S. Blinder points out somewhat overlap:


I like both the beginning and the end of the book. The author's conclusions are perhaps not brand new but he has the merit of describing these complex issues very smoothly.


How the financial crisis developed in the U.S. and reshaped the local banking landscape.

If I had to stick to one argument for reading the book, it would be this part. Alain reports the history of the crisis easily understandable for everybody and gives a good overview of the U.S. banking sector before and after the 2008/09 financial crisis. He describes the following main events: 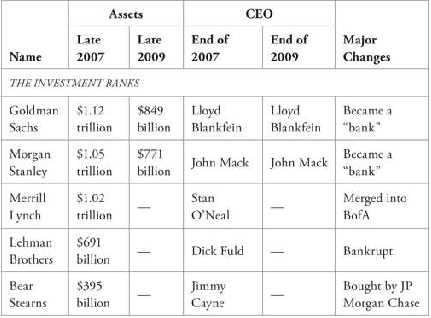 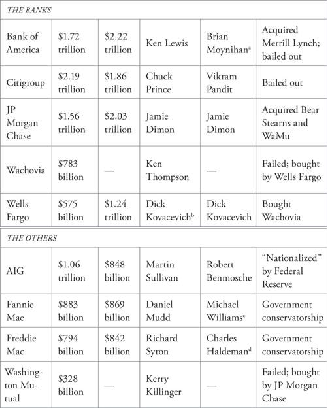 Monetary and economic recovery programs in the U.S.

Alain S. Blinder details the options that the FED had to safeguard the economy, i.e. injecting capital directly into banks, buying toxic assets, refinance banks and their toxic assets, or guaranteeing toxic assets. He develops the following operations initiated by the FED and the U.S. government:


In addition to the above, a merit of the book is its clear description and distinction of conventional and unconventional monetary policy measures as well as the moment when central banks switch from the first policy set to the latter. As Alain explains, a switch should be made when interest rates get close to zero.


Too big to fail debate

The author starts off with a very simple solution to avoid banks being too big to fail: Break up financial giants and, thus, simply avoid the existence of systemically important financial institutions. However, the author rightfully rejects this simplistic and unrealistic solution.

What's the alternative then? Stronger regulating the financial system. This is exactly what the Dodd Frank reform does. Alain S. Blinder touches upon every important topic here – from separating investment and commercial banking, over skin-in-the-game requirements for originators of securitized financial assets and capital and liquidity requirements for banks to executive compensation.

The author describes and criticizes the regulatory process following any new law on financial regulation (i.e. proposal of regulation, comments and input by the public, fixing of the regulation). In his view, this process is fundamentally flawed because it is not the general public that gives input but only biased parties and lobbyists.

For the author, it is a given that the FED must revert to a normal monetary policy in the near future. Otherwise, it would risk fueling the next bubble, namely through interest rates close to zero and excess reserves of banks with the FED.

The question is just when and how. Obviously, this part of the book has been, to some extend, run over by the FED's exit strategy, now being in place since a few months.

Additional topics of the book include the spread of the 2007/08 financial crisis into Europe and the European sovereign debt crisis from late 2009 to 2012. These parts, even though well written, are clearly not Alain S. Blinder's main focus. I would recommend reading the book if you are interested in the U.S. stuff. There are certainly other books out there which treat the European topics better and more extensively. 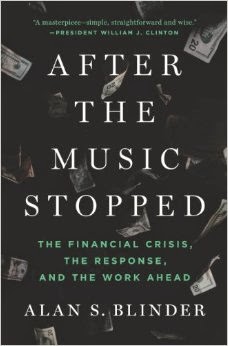 “A bubble is a large and long-lasting deviation of the price of some asset – such as a stock, a bond, or a house – from its fundamental value. Usually it's an upward deviation. The definition of what is large and what is long-lasting makes it difficult to predict and recognize bubbles. The fundamentals always win out in the end, the question is just when.”

“Risk spreads were irrationally small [in the run-up to the financial crisis] and therefore had to widen.”

“Leverage is a double edge sword. It does magnify returns on the upside, which is what investors want. But it also magnifies losses on the downside, which can be fatal.”

“The result of extreme leverage is predictable, though its timing never is.”

“When times are good, asset value are rising, and loan defaults are rare, it is all too easy to forget one of the laws of financial gravity: What goes up too fast usually comes crashing down.”

“Complexity and opacity are potential sources of huge profit.“

“Had Wall Street not concocted a system that was long on complexity and short on liquidity, the panic might have been contained.”

“The fallout from the bankruptcy of Lehman Brothers was the exception that proved the rule [that exceptional adverse economic events do happen].”

“The TARP was among the most successful – but least understood – economic policy innovations in our nation's history.”

“Credit is a coward. It struts around when times are good and lending risks are low, but runs and hides whenever risk rises. Since credit is critical to any modern economy, that's a problem.”

“The financial crisis gave hedge funds a bad name, probably a worse name than they deserved.”

“But no matter how lengthy and complex the law, it is virtually never more than a skeleton. The sketchy, sometimes thematic content of each regulatory statute must be translated into concrete, detailed regulations by the agencies involved.”

“In a capitalist society, rearranging property rights outside of well-established legal channels, such as bankruptcy courts and foreclosure proceedings, is a nasty process – something to be avoided except under extreme circumstances.”

“The more things change, the more they stay the same.”

“The cure [a blueprint for financial reform through the Dodd Frank Act] was being prescribed long before the diagnosis was in.”

“It seems that the FED's exit strategy has to be not too fast and not too slow, but just right. The FED is human; it won't get the timing exactly right. Rather, it will err in one direction or the other. But magnitudes matter.”

“The truly horrendous budget problems for the U.S. come in the 2020s and 2030s, and beyond. The projected deficits are so huge that filling most of the hole with higher revenue is simply out of question. Spending cuts must bear most of the burden. Over the long term, controlling spending means controlling health care spending. It's that simple – and that complex.”

“The story won't be complete until the “exit” from the European sovereign debt crisis comes. And that may be a long way off.”

“Europe dragged its collective feet, each time kicking the can just far enough down the road to get to the next summit meeting.”

“The new LTRO looked like a game changer. But it did not solve the sovereign debt crisis. The central bank can't do that, of course, any more than the FED can solve the U.S. government's mounting debt problem. Only governments can – by cutting spending and raising more revenues.”

“Moral hazard is now an undesirable feature of the financial landscape. One important aspect of Never Again is convincing financial markets that the government will not rescue them from future mistakes. The game of “heads you win, tails the taxpayer loses” is not one we want to keep playing.”

“When the good times roll, investors expect them to roll indefinitely. But they don't.”

“We need real regulation, zookeepers watching over the animals.”

“What you don't know can hurt you.”

“Modern finance thrives on complexity; indeed, you might say that the central idea of financial engineering is complexity. But ask yourself whether all those fancy financial instruments actually do the economy any good. Or are they perhaps designed to enrich their designers?”

“Bubbles will be back. So will be high leverage, sloppy risk management, shady business practices, and law regulation. We need to put in place durable institutional changes that will at least make financial disruptions less damaging the next time the music stops.”
Posted by Florian Lummert at 10:32 PM