The European Investment Bank – “We can accept more credit risk than a commercial bank.”

What comes to you mind when you think about Luxembourg? My guess is that you come up with key words such as “tax heaven” or “investment fund industry”. The city-state is a bit less well known for its European institutions, among them the European Investment Bank (EIB) that I would like to present today.

What is the EIB?

Created in 1958 by the Treaty of Rome, the EIB is the long-term lending bank of the European Union. Its mission is to contribute towards the integration, balanced development, and economic and social cohesion of the EU member states.

“The EIB is both an EU body, accountable to the Member States, and a bank that follows best public and private sector practice in decision-making, management and controls.”

EIB is both an EU body and a bank.

Even though the organization is politically deeply intertwined with the EU bodies and member states, it remains, as a bank, financially autonomous: To fund its operations, it borrows from international capital markets. In addition, it is an eligible counter-party in the Eurosystem’s monetary policy operations and has access, through the Central Bank of Luxembourg, to the monetary policy operations on the European Central Bank.

The EIB is also majority shareholder of the European Investment Fund (EIF). Incorporated on 14 June 1994 in Luxembourg as an international financial institution, the primary tasks of the fund are

What does the EIB?

First and foremost, the EIB is a lending institution. When I write about loans here, I mean providing finance in a large sense. As a matter of fact, EIB usually only lends directly to big projects, exceeding 25 MUSD. But EIB can also grant finance indirectly, i.e. through private banks, if it guarantees loans endorsed by commercial banks. Some general criteria characterize EIB lending / guaranteeing:

“The EIB is the world's largest multilateral borrower and lender.”

The European Investment Bank is, above all, active in EU member countries. 90 % of its lending is spent on projects in Europe. However, projects outside the EU are also carried out if they support EU external priorities. In total, EIB is active in over 160 countries.

Additional tasks include cooperating with international organizations and banking and financial institutions in the countries to which EIB's operations extend.

EIB praises the strong quality of its financial assets: For example, the impaired loans ratio is close to zero (0.2 % of the total loan portfolio by the end of 2013).

The Bank does not view its treasury activities as profit-maximizing, even though performance objectives play an important role. Investment activities are conducted with the primary objective of protecting the capital invested.

On the liability side, the bank does not hold deposits and refinances itself mainly through bond issues. These bonds can carry special features such as climate awareness bonds, structured for socially responsible investors.

In its role as an issuer, the bank can be seen as a conduit for investment from outside Europe into the Union, as roughly 40 % of its bonds are subscribed by non-EU investors.

The bank is not a profit maximizing institution. As the financial arm of the EU, it passes benefits on to its customers. More specifically, profits progressively build up a reserve fund of up to 10 % of EIB's subscribed capital.

The business model of the bank generates moderate profits from large volumes of loans financed at low margins. EIB has recorded a surplus in its statutory accounts in every year of its existence. 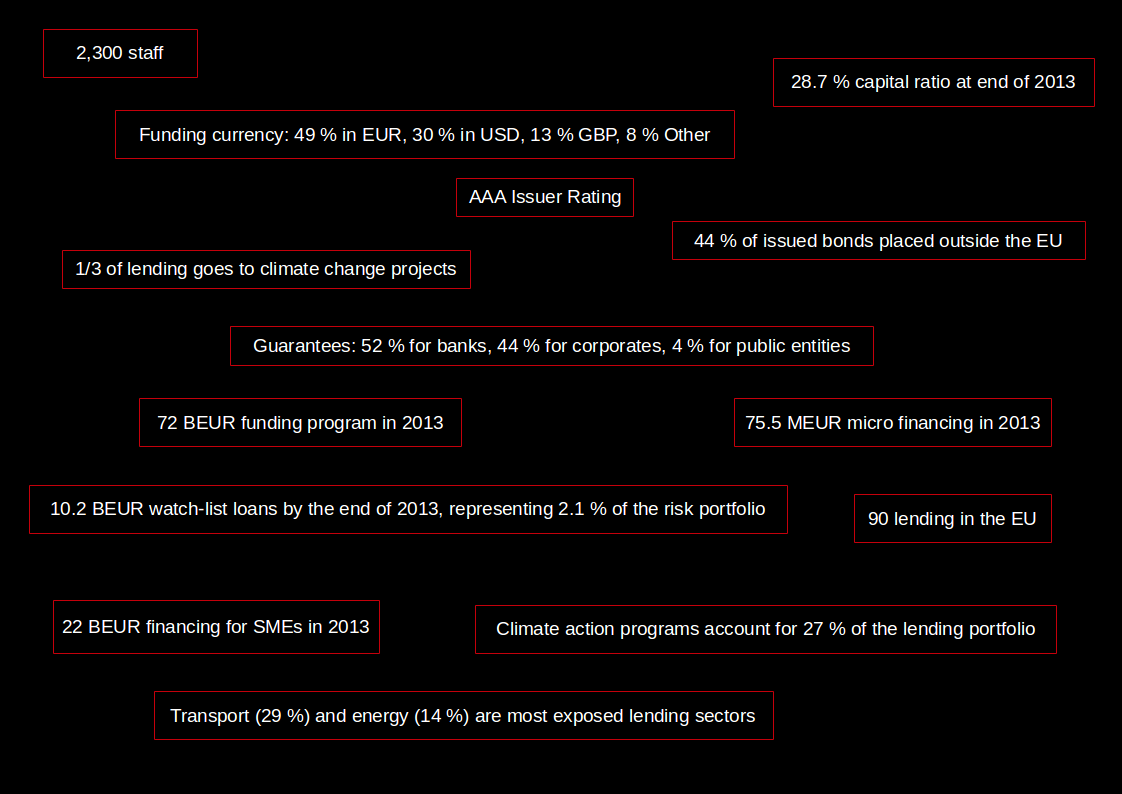