Last time, I promised to compensate for my rather academic post on sanctions. So how do current Ukraine-related sanctions fit the scheme I described a few days ago?


Who has imposed which sanctions so far?

Since March 5, 2014, the Council of the European Union adopted several conclusions, freezing funds of Russian citizens identified as responsible for misappropriation of Ukrainian state funds. The Council also imposed travel restrictions. On July 29, 2014, the EU expanded the sanctions. It now limits access to EU capital markets for some Russian financial institutions and corporations, imposes embargoes on trade in arms, and limits transfer of technologies.


Since March 10, 2014, the U.S. Government blocks U.S. assets of persons involved in undermining democracy in the Ukraine and prohibits these persons entering the U.S.


On August 7, 2014, the Russian Government responded by banning imports of agricultural produce, raw materials, and food products from the U.S., the EU, Canada, Australia, and Norway.


Why have sanctions been taken and what do they intend to achieve?


On the U.S. side, the Government sees a national emergency:


“The actions and policies of persons, including persons who have asserted governmental authority in the Crimean region without the authorization of the Government of Ukraine, that undermine democratic processes and institutions in Ukraine, threaten its peace, security, stability, sovereignty, and territorial integrity, and contribute to the misappropriation of its assets, constitute an unusual and extraordinary threat to the national security and foreign policy of the United States.”


What a fabulous sentence! You have to read it at least ten times to know what it means! So let's look at it step by step: The U.S. perceives a threat to its national security and foreign policy. Why? Because foreign (especially Russian) people undermine democratic institutions in Ukraine. At this stage, you can agree with this statement or not; but, at least you have understood it now.


The EU targets maintaining political stability in the region:


“The European Union has important relations with Ukraine and the Russian Federation and stands ready to engage in a frank and open dialogue with them. It has a special responsibility for peace, stability and prosperity in Europe. We will pursue these objectives using all available channels and ask the EU representatives to take all necessary initiatives.”


“The EU again encourages the Ukrainian authorities to implement an inclusive process, to pursue their efforts to ensure free and fair elections and to advance constitutional reform. All human rights violations and acts of violence need to be properly investigated and measures need to be stepped up to combat impunity.”


“The European Union remains committed to uphold the sovereignty and territorial integrity of Ukraine. […] The European Council firmly believes that there is no place for the use of force and coercion to change borders in Europe in the 21st century.”


Russia, in turn, has taken its “special economic measures to ensure the security of the Russian Federation.” Its Prime Minister, Dmitry Medvedev, sees them as retaliatory acts:


“I have repeatedly stated that there is nothing productive about sanctions. We had a hard time deciding on retaliatory measures, and we were forced to make this decision.”

“For a long time, Russia has not responded to the so-called sanctions declared against it by certain countries. Until the last moment, we hoped that our foreign colleagues would realize that sanctions lead to a blind alley, and that no one benefits from them. But they didn’t realize this, and now we have been forced to respond.”


“The retaliatory measures that we are introducing will essentially open up shop shelves for domestic producers. Of course, Russian farmers will have to accomplish a lot and work hard, but this opportunity to launch and expand import substituting production facilities should not be missed. […] I am sure that our market will be filled with fresh quality Russian products, which anyway many Russians prefer to the imported ones.”


Have sanctions been effective?

It is obviously too early to give a clear answer to that question.

Economists of the Institute of International Finance say the direct financial impact of sanctions on Russia is likely to be manageable. In fact, most Russian companies don’t depend specifically on foreign financing in the near term. In the long run, however, this might be different as Western lenders could follow economic sanctions beyond their precise scope of application to avoid any legal risk or stigma attached to financing the Russian economy.

Even in the long run, the Russian central bank might compensate for absent foreign financing. It has already started increasing bank refinancing and broadening the scope of securities and loans acceptable as collateral.

Beyond the issue of foreign financing, the Russian economy might suffer from significant capital outflows (see chart below). This could trigger a further recession of the Russian economy, especially if not compensated for by rising oil prices. 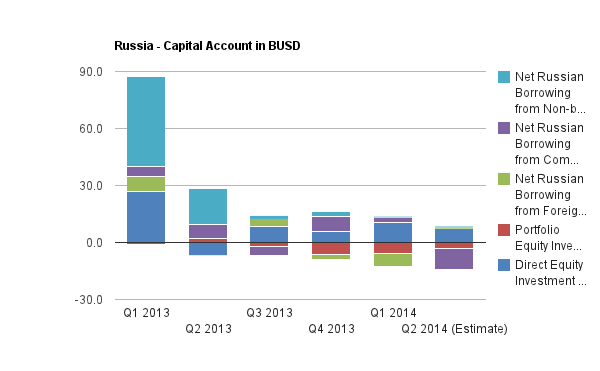 The immediate reaction of financial markets has been mixed so far:

Even though Russia's stock market (here measured by the RTS index) has declined heavily after both announcements of recent sanctions, it is not clear whether this is a sustainable trend. 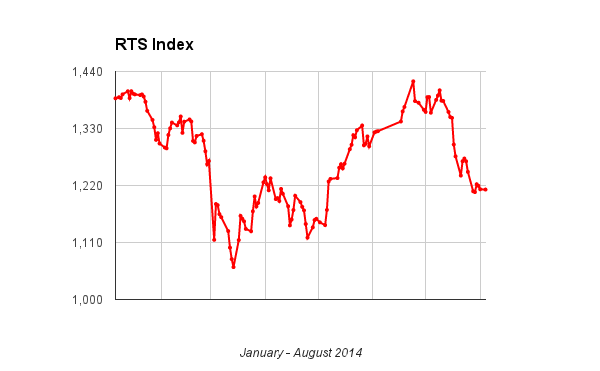 The same holds true for Russian CDS spreads and government bond yields; they have increased significantly after the announcements of the sanctions.


Finally, the Ruble has experienced a sharp devaluation since the beginning of 2014. However, it seems that only the second announcement of sanctions (in July 2014) has had a significant impact on the currency. 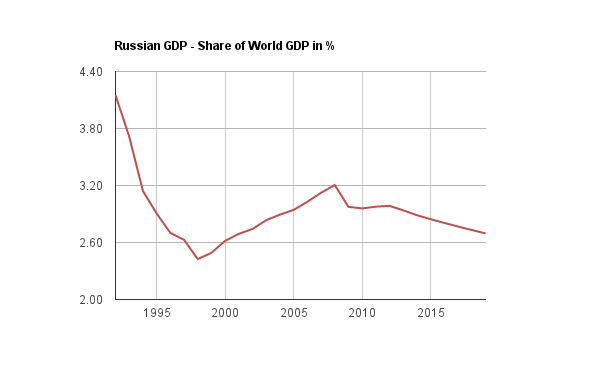 Posted by Florian Lummert at 11:13 PM