Let’s first have a closer look at the fines: 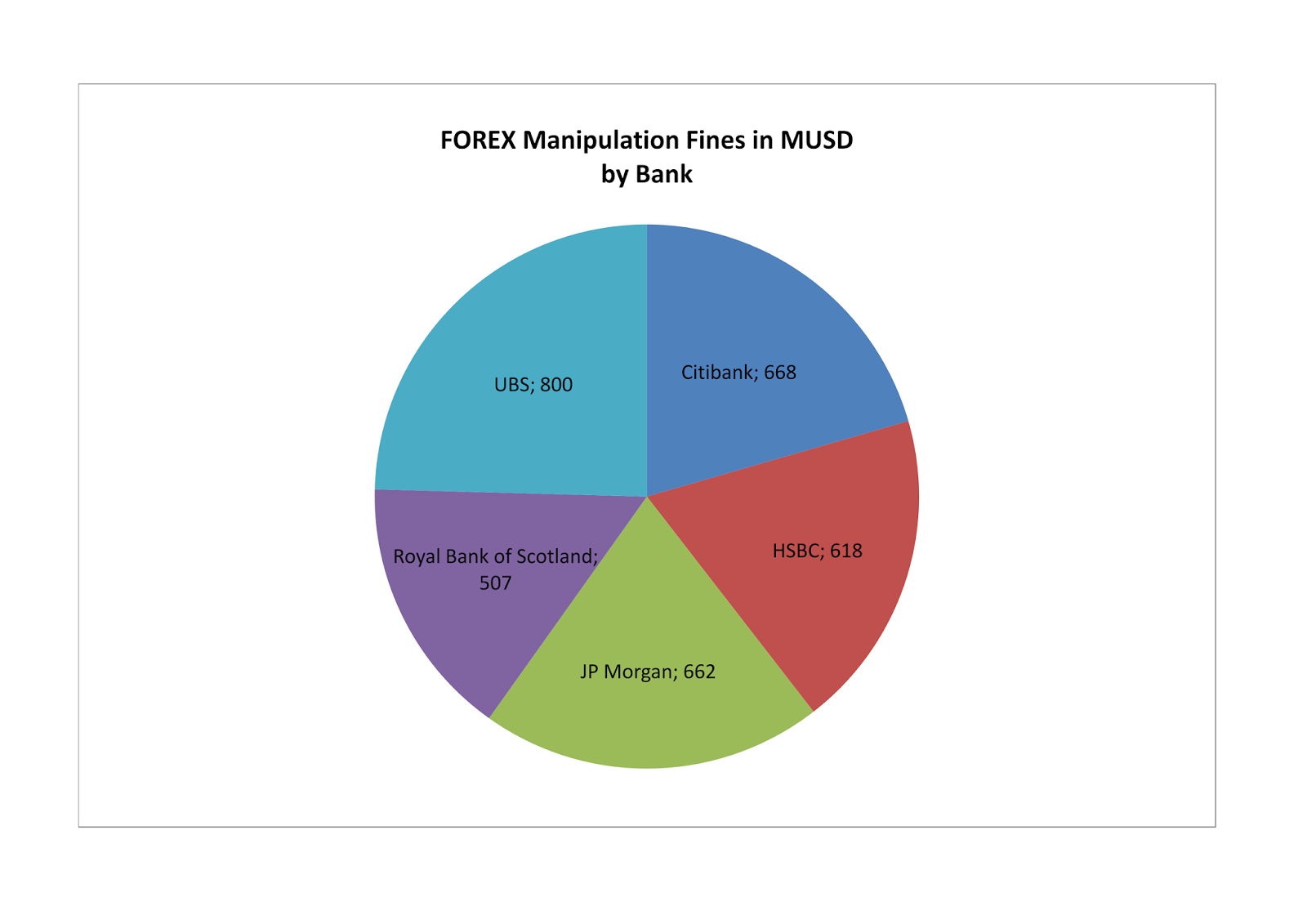 Fines are pretty evenly distributed among the banks. UBS stands out because it not only settled with U.S. and U.K. regulators but also with its home regulator FINMA. 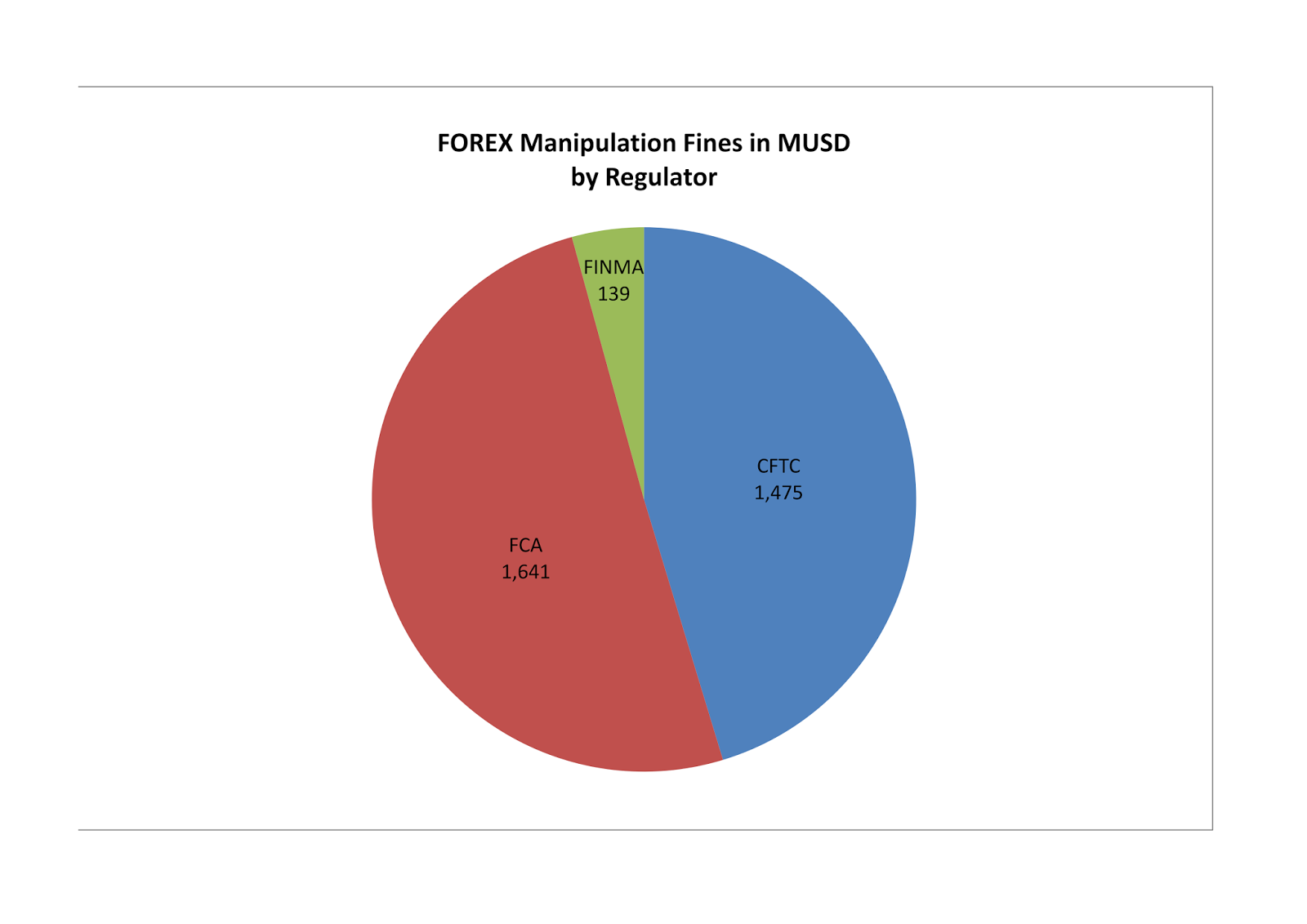 As FOREX trading desks are mainly situated in London and New York, these were also the main regulators involved. It stands out that U.K.’s Financial Conduct Authority (FCA) was even more severe than its U.S. counterpart, the Commodities Futures Trading Commission (CFTC). FINMA, the Swiss financial markets regulator, however, didn’t actually impose a fine in a narrow sense. It rather asks UBS to pay back illegally obtained return and avoided costs.

In total, fines amount to 3.3 bn USD. As a comparison, this represents the fines of 28,000 aggravated thefts in France or 8 % of the combined 2013 net income of the fined banks.

In contrast to other financial litigation, this one is, in my view, rather easy to understand.

On the merits, there is one notable difference between CFTC’s approach on the one hand and FCA’s / FINMA’s approach on the other hand: Whereas in the U.S., there exists specific legislation forbidding any willful manipulation of commodities’ (including FOREX) prices, the U.K. and Swiss regulators did not invoke such legislation. Rather, the latter sanctioned the banks on the grounds of violations of general prudential requirements such as insufficient control systems and negligence of client information confidentiality.

Obviously, the tedious work of regulators was here to establish the facts. In the end, they gathered ample evidence from private electronic chat rooms to show that traders manipulated, between 2008 and 2013, FOREX fixings by sharing client information on upcoming trades and coordinating trading strategies.

As a reminder, front running means trading ahead of your client: If you know that you will execute a huge order on behalf of your client soon, you know that this higher demand will increase prices. It would then obviously be interesting for you to buy before and sell, at a higher price, once you have executed your client’s transaction.

But traders did not only practice front running. They also shared information about (upcoming) FX transactions and trading strategies to drive certain benchmark exchange rates up or down. They namely tweaked the 4 p.m. World Markets/Reuters Closing Spot Rates, most widely used in U.S. and global foreign exchange markets, and the 1:15 p.m. ECB fix. The Reuters fix is based on actual trades and calculates the median of bids and offers extracted from a certain electronic trading system during a one-minute window. Given this small sample, you can easily understand that traders were motivated to alter the benchmark.

The chat conversations that the regulators provide are indeed striking and show that traders placed their personal interest beyond those of their employers and clients.

What do regulators say?

“The FCA does not tolerate conduct which imperils market integrity or the wider UK financial system. Today’s record fines mark the gravity of the failings we found and firms need to take responsibility for putting it right. They must make sure their traders do not game the system to boost profits or leave the ethics of their conduct to compliance to worry about. Senior management commitments to change need to become a reality in every area of their business. But this is not just about enforcement action. It is about a combination of actions aimed at driving up market standards across the industry. All firms need to work with us to deliver real and lasting change to the culture of the trading floor. This is essential to restoring the public’s trust in financial services and London maintaining its position as a strong and competitive financial centre.”
Martin Wheatley, FCA, November 12, 2014

“This is not about having armies of compliance staff ticking boxes. It is about firms understanding, and managing, the risks their conduct might pose to markets. Where problems are identified we expect firms to deal with those quickly, decisively and effectively and to make sure they apply the lessons across their business. If they fail to do so they will continue to face significant regulatory and reputational costs.”
Tracey Mc Dermott, FCA, November 12, 2014

“The setting of a benchmark rate is not simply another opportunity for banks to earn a profit. Countless individuals and companies around the world rely on these rates to settle financial contracts, and this reliance is premised on faith in the fundamental integrity of these benchmarks. The market only works if people have confidence that the process of setting these benchmarks is fair, not corrupted by manipulation by some of the biggest banks in the world.”
Aitan Goelman, CFTC, November 12, 2014

What do banks say?

“The RBS Board fully accepts the criticisms within today’s announcements and condemns the actions of those employees responsible for this misconduct. Today is a stark reminder of the importance of culture and integrity in banking and we will rightly be judged on the strength of our response.”
Philip Hampton, Royal Bank of Scotland, November 12, 2014

”Since becoming Chief Executive, I have worked to ensure that everyone within the bank understands the importance of regaining the trust of our customers. In order to achieve that trust we must set ourselves the highest standards of integrity and professionalism, both individually and collectively - this episode has clearly shown us to have fallen well short of that. Now, it’s up to us to show that we can learn the lessons of these mistakes and can be worthy of earning trust in the future.”
Ross Mc Ewan, Royal Bank of Scotland, November 12, 2014

“If felt pain for our stuff and customers again [referring to FOREX fines against RBS].”
Ross Mc Ewan, Royal Bank of Scotland, November 12, 2014

“Citi acted quickly upon becoming aware of issues in our foreign exchange business and we have already made changes to our systems, controls and monitoring processes to better guard against improper behavior. While today’s settlements resolve significant investigations into Citi’s foreign exchange business, as we have previously disclosed, several additional regulatory agencies and enforcement bodies are conducting investigations and making inquiries into this business. We continue to fully cooperate with these investigations and inquiries.”
Citibank Press Release, November 12, 2014

"Today's resolutions are an important step in our transformation process and towards closing this industry-wide matter for UBS. We continue to cooperate with related ongoing investigations."
Sergio P. Ermotti, UBS, November 12, 2014

Last, but not least: What do (or rather did) FX traders say?

More control of chat rooms, more compliance, more whistle blowing, a change of culture, and automation of FX trading are to come. As said a UBS FX trader, back in 2012: „It’s a new world out there“.

The CFTC orders can be found here.

FCA’s final notices on the fines are available for download here.
Posted by Florian Lummert at 7:06 AM