In October 2014, the ECB has published a report on the structure of the European banking sector.

In a nutshell: “Cost containment”, “deleveraging”, “restructuring”, “rationalization”, “resizing process”, “balance sheet repair”, and the like all describe the same finding: The sector is shrinking.

For people working in banks, this is certainly less of good news. The cake is actually getting smaller but the number of invitees to the party remains pretty much the same.

But is this all bad? No. As a matter of fact, the ECB says that the overall efficiency of the system continues to increase.

Overall, the number of foreign branches in Eurozone countries has, since 2008, been flat. However, this masks huge differences across the continent:

In aggregate, total assets of domestic banking groups are down 18 % since 2008.

At the end of 2013, total assets amounted to 23 BEUR. This represented roughly twice the 2013 GDP of all Eurozone countries.

Total assets of foreign subsidiaries and branches in the Eurozone shrank even more. Overall, they are down 29 % since 2008.

Distribution of banking sector assets by type of institution

Large European economies are very much dominated by local financial institutions. This is especially true for France, Germany, Greece, Italy, Netherlands, and Spain, where assets held by domestic credit institutions are around or exceed 90 % of total banking sector assets.

By contrast, Estonia, Finland, Luxembourg, and Slovakia are all heavily dominated by subsidiaries of EU credit institutions.

Malta is, obviously, a hub for branches of non-EU credit institutions.

Overall, the markets for credit institutions in Europe are not very concentrated. On average, the Herfindahl index stands at 1,202. Given the index ranges from 0 (fully competitive market) to 10,000 (monopoly) and the fact that only values above 1,800 signal high concentration, Europe is a pretty competitive market.

The findings of the Herfindahl index match the statistics of the share of total banking assets held by the five largest credit institutions.

This post is about trade finance data only. Enjoy!

Number of deals of Top 10 Banks

Dealogic Trade Finance Review
Posted by Florian Lummert at 12:25 AM

Research departments of banks are an excellent place to look at if you want to understand conflicts of interest in a bank. A recent example is a FINRA case in which ten banks accepted to pay a total of 43.5 MUSD in fines. 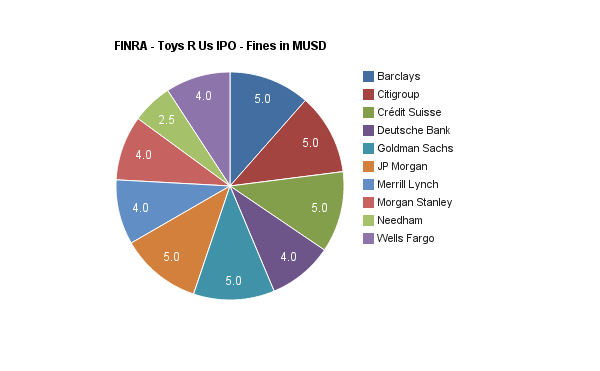 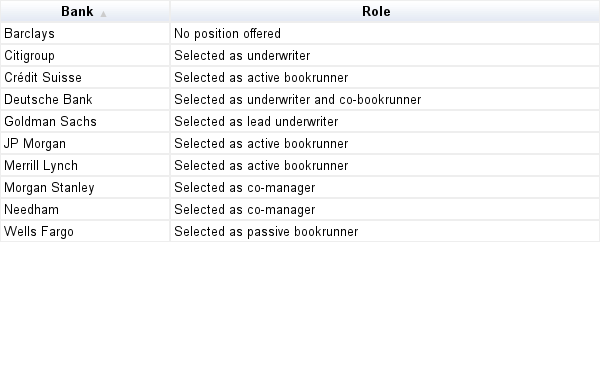 What do securities research analysts do?

First the obvious: They research on securities – How did they perform in the past? How will they perform tomorrow? What are they worth today? The more formal definition says that research departments of banks provide economic research about financial securities to clients and formulate investment recommendations.

For example, Citigroup writes that “the breadth, depth and strength of our sales and trading, distribution and research capabilities span a broad range of asset classes” and that “through our web, mobile and trading applications, clients can find Citi research and commentary and proprietary data and analytics”.

In banks, research departments usually constitute profit centers or, at least, are part of them. For example, Wells Fargo’s economics group is part of the bank’s “Investment Banking / Securities & Markets” unit.

The above description suggests that research analysts are exclusively working for clients to whom the bank wants to sell financial securities.

But what happens if the bank also participates in generating the same securities which are, later on, sold to clients? Let’s be more specific: The investment banking department helps a client listing his shares and the financial markets department then helps selling them to investors. In this case, the bank builds a Chinese Wall (which is, knowingly, so huge that you can see it from the moon) between both departments. On which side sits the research analysts?

A research analyst is not an investment banker.

In the U.S., the situation is, on paper, clear. FINRA (the Financial Industry Regulatory Authority) Rules say:

Toys R Us IPO – Playing with the research analyst?

In April 2010, Toys R Us invited several banks to pitch for broker-dealer roles in its planned IPO. In the request to banks, the company asked the banks’ research analysts to make presentations about their view on Toys R Us and its valuation to the company’s management.

“TRU [Toys R Us] would consider each analyst’s views of the company and whether the analyst’s valuation was consistent with the firm’s investment bankers’ valuation.”

In addition, the IPO candidate sent templates to the banks for signature. This was to “prevent TRU [Toys R Us from being “burned” by an analyst’s decision to adopt a negative view of TRU after the company had awarded its investment banking business to the analyst’s firm.”

All pitching investment banks accepted to make their research analyst participate in their pitch. The facts vary slightly. Deutsche Bank can serve as an example:

“By providing TRU [Toys R Us] the unified valuation it sought, DBSI [Deutsche Bank] indicated to TRU that post-IPO research coverage would be positive and aligned with investment banking.”

“The analyst told TRU [Toys R Us] and the Sponsors that he was “very excited” to be speaking with them and noted his “extensive transactional experience,” noting that he had “worked on more than a dozen retail IPOs.”

Merryl Lynch’s analyst did not speak but helped investment bankers by his mere presence:

“I am sorry that I was not permitted to speak about many specifics today, but I hope that my enthusiasm surrounding the Toys R Us story was evident.”

It is pretty obvious that the story contradicts the FINRA rules. More surprising are the varying amounts of the fines: The implication and the roles which were offered to the banks varied substantially but seem to be disconnected from the amount of the fines.

Furthermore, I wonder who is at fault here – the banks or Toys R Us, asking banks to make research analysts work.

A final note on the file: Toys R Us ultimately abandoned the IPO…