On July 21, 2015, the BRICS have officially launched the New Development Bank (NDB) in Shanghai, where its future headquarters will be situated. 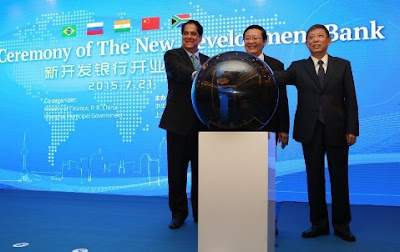 
Here are the five main questions about the NDB:


Who has set up the NDB and why?

Founding parties are the BRICS (Brazil, Russia, India, China, and South Africa). This is why the NDB is also referred to as the “BRICS Development Bank”. The bank shall both reflect and increase the economic cooperation among the BRICS.


What does the NDB?

The NDB supports infrastructure and sustainable development projects in BRICS and other emerging economies and developing countries. It can support public and private projects. As such, the bank complements existing efforts of multilateral and regional financial institutions for global growth and development.

In terms of financial instruments, the bank intends to grant loans, guarantees, and equity participations. In addition, it can cooperate with international organizations and provide technical assistance for infrastructure and sustainable development projects.

Besides, the NDB can do special operations using special funds, whatever that means…


How much capital will the NDB carry?

The NDB will have a 100 BUSD capital cushion. This is impressive, isn’t it?

Look at the above graph: Only 10 BUSD is actually paid for in cash. Callable shares (40 BUSD) can only be called upon if and when the NDB needs those funds to meet its obligations. Other Initial Authorized Capital has not been subscribed yet at all.

Thus, we are actually talking about 10 BUSD in cash. But when will these funds actually be paid? Take a look at the graph below.


How is the NDB organized?

Internally, its Board of Governors decides on important issues regarding the NDB itself (change of capital stock, change of agreement, distribution of net income, and the like). The Board of Directors conducts the bank’s general operations such as business strategy, accounting, and budgeting. The President (and its Vice President) is the chief of the operating stuff and, as such, hires and fires stuff, heads the credit and investment committee, etc.


Where does the name “New Development Bank” come from?

I found the name of the NDB strange. Is it a new kind of bank? Or will the bank implement a new kind of development? Actually, I don't know where the name comes from and what it means and can only speculate. My guess is that the development bank is “new” simply because we love everything that is new...

Agreementon the New Development Bank dated July 15, 2018
Posted by Florian Lummert at 9:54 AM