23 Things they don’t tell you about capitalism – „This book is not an anti-capitalist manifesto.”

„This book is not an anti-capitalist manifesto.” – writes Ha-Joon Chang in the introduction to his book. “Being critical of free-market ideology is not the same as being against capitalism. […] My criticism is of a particular version of capitalism that has dominated the world in the last three decades, that is, free-market capitalism.” 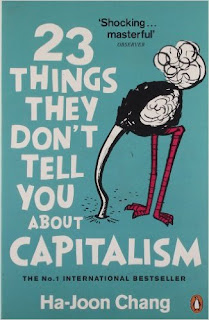 Even though it is pretty one-sided in criticizing our today’s economic system, the book contains some interesting thoughts other than those that you usually read in the financial press. Here are the “things” that I found most interesting:


Markets need (not) to be free.

The author says that, in reality, a completely free market doesn’t exist. As a matter of fact, every market has some rules and boundaries that restrict freedom of choice. For example, any modern economy needs to accept that slavery or child labor are no more allowed and firms also need to respect at least some level of environmental regulation.

As a consequence, the question is not “Are you for or against free markets?” but “How free should markets be?”.


Shareholders own companies. Therefore, companies should (not only) be run in their interests.

Ha-Joon writes that shareholders are often short-term investors and, thus, interested short-term profits. In the interest of the economy as a whole as well as the firm, long-term profits should be sought instead.

It is true that shareholders are not the only stakeholder. Others, such as customers, the state, or the employees, should also be considered. However, it still seems logical to me that the people putting their money at risk (i.e. the shareholders), have a paramount importance.


Taming inflation has (not) laid the basis for greater long-term prosperity because it (does not) provides more economic stability which is, in turn, necessary to enhance long-term investment.

Inflation may have been tamed, but the world economy has still become considerably shakier. The author emphasizes that inflation is only one of the indicators of economic stability. Others, such as the number of banking crisis and unemployment, remain important.


“Our obsession with inflation should end.”


We are (not) in a post-industrial age where most people work in services and most outputs are services.

Ha-Joon writes that the industrial sector is still important, even though he acknowledges that many more people today work in services than in manufacturing. Three reasons for that:

Government should (not) give the maximum degree of freedom to business.

The second argument of the author was more surprising for me: Government regulation works, not because the government has superior knowledge, but because it restricts choices and thus the complexity of the problems at hand.


“We need regulation exactly because we are not smart enough.”

Today, high frequency traders (or, rather, their computers) decide in milliseconds where to invest and divest.

Even though he wrote the book before the hype around HFT began, Ha-Joon Chang provides an interesting thought here, writing that the real economy needs patient capital for long-term investments, not short-term investors.


“Economics does not seem very relevant for economic management in the real world.”


This statement proves that Ha-Joon Chang’s book is not like usual main-stream books about our economy. I would recommend reading it, even though you don’t necessarily need to adhere to its entire content.