No, introducing a leverage ratio in the Basel III framework does not leverage trade finance. It rather kills it. You can debate whether it actually leverages the security of the financial system, even though this is, at least, its purpose.

Here is the formula, to be calculated quarterly:


It’s perhaps a bit intriguing that the leverage ratio is here a minimum ratio as we are more used to see leverage as something bad (“The more your company is leveraged, the more dangerous it is.”). In banking, it’s the other way round.

Tier 1 Capital is the smallest form of capital. Extremely simplified, we add up equity, retained earnings, and other paid-in and not subordinated capital instruments.

The fact that the numerator is the smallest capital form makes the denominator even more important: The Exposure Measures comprises

Trade finance consists of letters of credit and guarantees. Both are off-balance sheet items. Hence, a trade finance instrument issued by a bank requires a specific amount of Tier 1 Capital to keep the leverage ratio above the 3 % threshold.

So far, so bad. But this is actually not all.

Let’s remind ourselves how we calculate RWA for trade finance instruments when it comes to capital ratios: 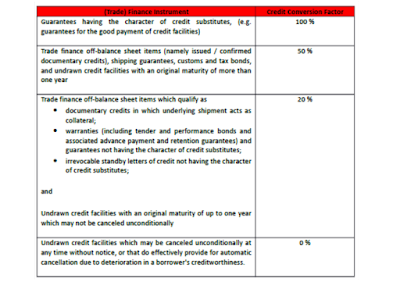 But the 1st step is altered as well because the proposed credit conversion factors are actually higher: 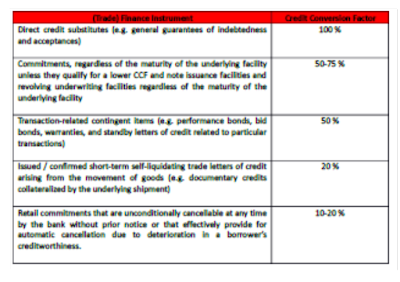 If you (I suppose you are a trade finance banker!) don’t have enough by now, let me add a final surprise well hidden in an Annex called “Basel III Leverage Ratio Framework”:

“[…] Banks must not take account of physical or financial collateral, guarantees or other credit risk mitigation technique to reduce the leverage ratio exposure measure.”

I wish good luck to a company which has just secured a multi-billion export contract, needs a performance guarantee for such contract, and is looking for a bank to issue this guarantee without being able, from a leverage ratio perspective, to syndicate its exposure.

The Basel Committee on Banking Supervision has proposed the above rules in April 2016 and envisages application in January 2018.

Until then, there is plenty of time to debate and, hopefully, amend the proposals.