The WTO Trade Facilitation Agreement – If you cut red tape, you need even more red tape to fix the cut…

On February 22, 2017, Roberto Azevedo, Director General of the World Trade Organization, stood in front of the international press and said: “I am very happy to announce that the WTO Trade Facilitation Agreement (TFA) has now entered into force.”

There is indeed reason to be happy, if you consider that this marks the end of a 13 year long negotiation and ratification process. 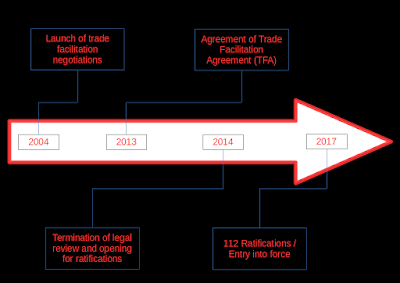 Section I: Provisions for expediting the movement, release, and clearance of goods, including goods in transit.

Imagine the following: My friend Expo lives in Exland, close to a river which marks the frontier with Imland. Just on the other side of the river lives his friend Impo. Expo produces crops and vegetables. Every Monday, he crosses the river by boat and visits his friend Impo. Impo has a farm and criers cows. They trade with each-other: Expo sells crops and vegetables to Impo and Impo sells milk and meat to Expo.

This works quite well until Expo and Impo go beyond buying for themselves: They buy stuff from each-other to sell it to their neighbors. This is where it becomes complicated. The neighbors actually want to know where the stuff comes from, be sure of its quality, and have a recourse if the quality doesn’t meet their expectations. After all, the neighbors don’t know both Expo and Impo personally, so why should they put confidence in both if them?

Beyond expectations, Expo and Impo still achieve satisfying all neighbors. But the next problem is looming: Indeed, Impo has a neighbor who also produces crops and vegetables – not actually the same but quite similar ones. And Impo’s neighbor obviously doesn’t like Expo and his products. He starts complaining with his neighbors, saying they shouldn’t actually buy products from the other side of the river: Not only does the transport deteriorate the quality of the products but, in addition, neighbors should support each-other instead of supporting people from the other side of the river, he says.

This is how both Exland in Imland develop, over time, export-, import-, and transit procedures. The TFA wants to streamline, simplify, and standardize those procedures.

“Reductions in time and costs to trade can make the difference between a country seamlessly linking up to an integrated global production chain or being left on the margins of a big part of world trade.”


Article 1 – “Tell me what you need!”
If Exland and Imland put in place export-, import-, and transit procedures, they must tell people what those procedures consist of. If you have something to say today, you should do so over the Internet, in a language that everybody (on the WTO planet) understands.


Article 2 – “Let me comment!”
As they are concerned by trade relations, Expo and Impo should be able to comment on them.


Article 3 – “I am different!”
If Expo’s or Impo’s goods are special, they should receive special treatment, both with regard to tariff classification and origin of goods rules.


Article 4 – “Let me complain!”
If Expo or Impo are unhappy about customs decisions, they should be able to complain.


Article 5 – “If you want a special control, you must tell me before.”
Foods, beverages, and feedstuffs might need special control – but Expo and Impo should be know that before.


Article 6 – “I want to pay less fees and no penalties!”
Indeed, but if they are appropriate and regularly reviewed, Expo and Impo must accept them anyway. Penalties should remain what they actually mean: A punishment for violating a rule. Expo and Impo should also get a written statement of what they have done wrong.


Article 7 – If I know that I come tomorrow, can we start the administrative stuff today? If I come every day, do we really need to go through the same stuff every day? Can I leave early if I provide guarantees?
On the first question: Yes! On the second question: No! On the third question: Yes!


Article 8 – Two border agencies – One frontier = 1.5 Formalities
Ideally, 2 – 1 = 1. But the WTO world is not ideal. At least, border agencies should cooperate and, thus, achieve a result below 2.


Article 10 – Why do you bother me if you can have the same result without bothering me?
Indeed a legitimate question, which the WTO answers saying that “least trade restrictive measures should be chosen where two or more alternative measures are reasonably available for fulfilling the policy objective(s) in question”.


Article 10 – “Modern technology and international standards are there to be used! I don’t need a customs broker, I can do it alone!”
The WTO applauds...


Article 10 – “No import = No taxes!”
Imagine Expo only passes goods to Impo for him to (process or repair them and subsequently) return or export them again. Why should anybody in Imland bother or charge a fee? After all, nobody in Imland ever uses the stuff.


Article 11 – Let’s play a game: How many times do you have to read the following sentence to understand it?
“Each Member shall accord to products which will be in transit through the territory of any other Member treatment no less favorable than that which would be accorded to such products if they were being transported from their place of origin to their destination without going through the territory of such other Member.”

If you need less then five times, you qualify for a WTO stuff member position. Here is what I understand: The fact that goods are transiting through another WTO member state is no reason for a less favorable treatment of such goods.

If you cut red tape, you need even more red tape to fix the cut… This is perhaps not fair – after all, there needs to be someone who controls the cut if you want to the sure that somebody cuts at all.


It’s actually funny that a treaty meant to combat administrative burden is written in the worst administrative language that you can imagine. But could this actually be different? I don’t think so: If governments talk to each other, they use their administrative jargon. And if they ultimately publish a result, why should such result be any different?