Mervyn King’s “The End of Alchemy” – The Beginning of new Banking Regulation?

In 2016, Mervyn King has written a great book about money, banking, and the future of the global economy. In my view, the book is at least 20 years ahead of its time. What Mervyn King proposes to make the financial system crisis resistant is both simple and completely intuitive. But it’s probably too easy to be adopted today. The complexity of financial regulation is too much of a crowded place for consultants, auditors, middle managers, and regulators to be left desert… 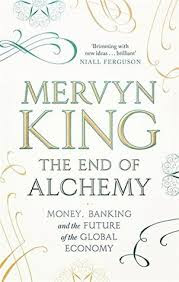 The financial crisis is the result of a saving / spending disequilibrium.

“If the economy had grown after the crisis at the same rate as the number of books written about it, then we would have been back at full employment some while ago.” If King writes this in his introduction, the obvious question is: Why do you add another one?

The 2008/09 financial crisis actually starts in 1989, when the Berlin wall fell and the free market doctrine was going global: King explains how China, India, and the countries of the former Soviet Union started producing and exporting cheaper consumer goods for the developed world. Over time, this lead to an imbalance between the developed and the developing world:

However, the developed world borrowed less than what the developing world wanted to invest, thus leading to ever lower interest rates which accelerated the vicious circle. At one point in time, the borrowers could no more reimburse and the house of cards collapsed.

What is financial alchemy?

At the heart of King’s book is his concept of financial alchemy – the idea that money equals physical goods such as gold and other precious metals. The alchemy consists of the belief that banks take everyone’s deposits short term (because we can claim the same amount of money back at any point in time) and invest it long-term without any risk for the depositor. Indeed, this is only true if you trust the system (investors, bankers, central bankers, etc. - basically everyone who participates in the financial system) and your trust holds true. In practice, Mervyn King writes, financial alchemy simply doesn’t work.

But what are these economic crisis events all about? King tries to come closer to a meaningful explanation using the concept of radical uncertainty.

Probability forecasting is everywhere in finance: Mathematicians take data sets from the past and derive probabilities for future scenarios. King writes that this is ok for managing risk. Risk is exactly that – the nature of a future outcome that can be defined precisely and, based on past experience, can be assigned some probability of the outcome occurring.

However, probability forecasting cannot handle uncertainty. The latter describes situations where you don’t know the outcome and, therefore, neither the probabilities of them occurring.

How to avoid financial alchemy?

Given the problem of maturity and risk transformation, how can we make bank deposits safe? The author gives four possible solutions:

LOLR vs. PFAS – Does it make a difference?

Today, in times of financial crisis, central banks are “lenders of last resort” (LOLR). They lend to failed banks if nobody else does any more – not to save any individual bank but to save the financial system as a whole.

Apart from taxpayers’ sentiment of injustice (“We pay for bankers who got high bonuses in the past for lousy work!”) LOLR involves two problems:

Acting as a pawnbroker for all seasons (PFAS), the central bank’s role in a financial crisis changes:

Mervyn King suggests implementing the PFAS system over a period of 10 to 20 years and describes the following concrete functioning:

In Mervyn King’s world of banking and finance, the answer is no. The central banking committing upfront to lend at all times against predefined assets makes all these things unnecessary. A pity for all the regulators, consultants, and compliance staff but what a fantastic win over bureaucracy!

But would it really be easier to determine asset haircuts for PFAS than to determine risk weighted assets? The author says that “the possibility to calibrate risk weights is an illusion [because of the presence of radical uncertainty].” I would say more or less the same about the asset haircuts. If you cannot figure out the riskiness of an asset because you don’t know anything about the future events that will trigger a crisis, how can you possibly know what an asset will be worth in such crisis? But still, the beauty of King’s system is that the central bank engages upfront to lend instead of hypocritically denying the necessity for a LOLR if such and such financial ratio is met.

Mervyn King’s book is excellent. If you are interested in the banking and finance world, you should definitely read it!