Do you remember Occupy Wall Street? The people “fighting back against the corrosive power of major banks and multinational corporations over the democratic process and the role of Wall Street in creating an economic collapse that has caused the greatest recession in generations”?

They would probably be disillusioned upon reading “Manias, Panics, and Crashes”, the reference book on financial crises written by Charles P. Kindleberger and Robert Z. Aliber. Why? Because once you read this book, you will understand that the next crisis is already underway – it’s just a question of time…

The course of a financial crisis 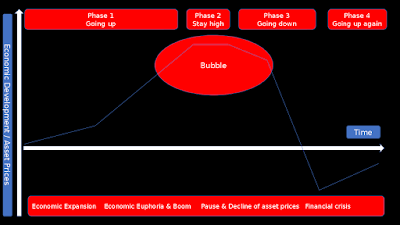 The cycle starts with cheap credit – lots of credit.

On the retail side, households see that others are profiting from speculative purchases and invest as well. Trading volumes increase.

The result of the above is higher asset prices. The curve goes up.

At the end of phase 1, an increasing number of investors seek short-term capital gains from increases in prices of real estate and stocks rather than from the investment income based on the productive use of these assets. In other words, people want to earn money not through holding on to the asset but through re-selling it as soon as possible with a profit. This is the moment when the famous bubble builds up. The authors write about a “loss of touch with rationality”.

Can central bankers do something about it?

The short answer is: No. They can perhaps shorten the supply of money as such. However, financial history tells us that there are many close substitutes of money that people can revert to: credit in all possible forms, real estate, commodities such as gold, crypto currencies, etc. Every time the monetary authorities try to control the amount of money, people will circumvent that covert by producing more near-money substitutes.

How to detect a bubble

If we cannot avoid the next financial crisis, can we, at least, detect the bubble before it bursts? For stock markets, the authors give some hints: In the long run,

During phase 2, we remain in the bubble but it stops growing. At the end, buyers become less and the sellers more eager.

Oftentimes, when prices stay high but don’t sprout any more, fraud and swindle spread around: As a matter of fact, when credit becomes scanty, people start using fraud to compensate. This is especially true in case of evergreen finance: This hints to the practice of loans being paid back not through earnings but through cash from new loans.

In phase 3, both firms and individuals realize that it’s time to become more liquid, i.e. to reduce holdings of real estate and stocks, and increase holdings of money. Prices start declining and credit is nowhere.

At this point in time, a specific event (failure / bankruptcy of a specific bank or firm, namely one which has previously been thought successful; revelation of a swindle; sharp fall in the price of a specific security or commodity such as oil; an unanticipated devaluation of a currency; a war or other far-reaching political changes; etc.) precipitates the crisis. The bubble bursts. It has to be like this; bubbles always implode because, by definition, they involve a non-sustainable pattern of price changes or cash flows.

The panic is often magnified through international contagion. Indeed, only very few markets are completely separated. This is all the more true in today’s globalized 21st century. Financial crises either affect a number of countries at the same time or, alternatively, spread from the centers where they originate to other countries. The means of transportation can take various forms – commodities, bank deposits, bills of exchange, specie, and last, but not least, pure psychology.

At one point in time, public authorities will feel obliged to intervene to avoid further price decline. Without doubt, such intervention can create moral hazard:

How can public authorities react? The book puts together possible measures which have been applied throughout financial history:

On a national level, the lender of last resort is either the treasury or central bank. The former can be less effective. By definition, a Government’s treasury cannot print money. This, indeed, makes it less flexible to meet any potential demand on the part of sellers. Is simply cannot buy once it has spent all funds and is unable to raise additional liquidity.

Financial crises oftentimes spread across countries, hence the need for an international lender of last resort. But such lender encounters several shortfalls:

The International Monetary Fund is today the main example for an international lender of last resort, even though his intervention is also pretty much dependent on its member states.

The book undeniably teaches you to take a step back and accept any financial crisis as what it really is: An unavoidable and recurring pattern of any financial system. In my view, it is a good preparation for the next crisis. On the downside, I found it sometimes a bit repetitive. But this is perhaps due to the fact that financial history itself is iterative.